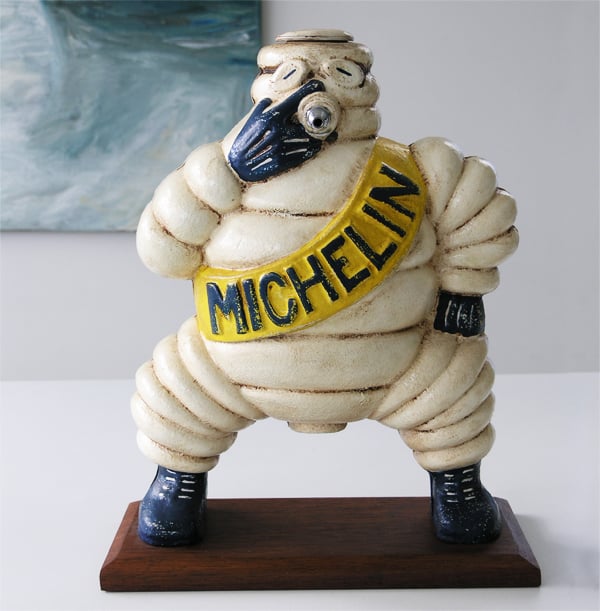 The Michelin Man – Sumo or brand icon
Just recently the Truly Deeply studio invested in some more character (not that we don’t have enough already) for the space we spend more than 9 hours a day in. We purchased an original statue reproduction of Michelin Man,  that used to be attached to a compressor. To be honest at first I thought the statue was ugly, but there was something in the way the icon stood with such confidence and conviction that grabbed me. It felt like we had a new member joining the Truly Deeply family. My thoughts were summed up by Pete, a Brand Scientist, who sits next to me at work;

“It may look like a sumo wrestler, but its a brand logo that has stood the test of time”.

Pete’s words stuck with me and I found myself asking, what is it in Michelin’s history that has allowed the Michelin Man brandmark to be so enduring? History is not my strong suit, but I was sufficiently stimulated to do a little digging. 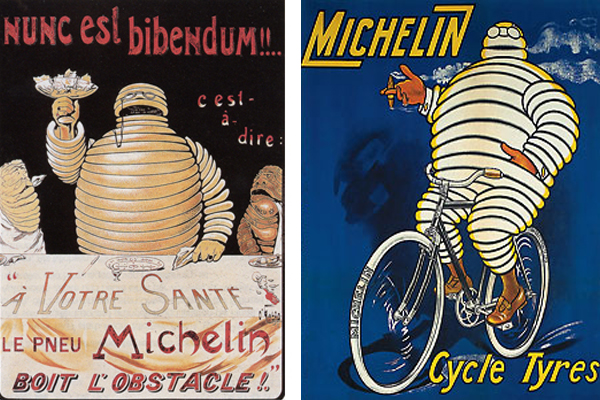 Back in the day
The Michelin Man, otherwise known as Bibendum, was created in 1889 by brothers André and Édouard Michelin who took control of a rubber business in Clermont-Ferrand, France. According to the company’s official history, a bicyclist came to their workshop in 1889 with a flat tire. Pneumatic (inflatable) tires had just been invented by John Boyd Dunlop the year before. Pneumatics provided a much more comfortable ride than the alternative solid rubber tires, but they were subject to punctures. In fixing the flat, the brothers discovered that the customer’s Dunlops were glued to the rims, making patches extremely time-consuming. They soon developed and patented a detachable pneumatic tire that could be repaired in 15 minutes.

Bibendum was created by a talented poster artist Marius Rossillon, but the idea was really born in the minds of the Andre and Édouard. A stack of tires resembled the outline of a person. Édouard said to Andre: “Look, with arms, it would make a man.” A little imagination and the Michelin Man was born.

The changing faces of the Michelin Man
Bibendum has changed numerous times over the years. At times probably loose guidelines, at other times clever adapting to the market context. The Bibendum character is flexible enough to allow the Michelin brand and its personality to continue to evolve while keeping an iconic and highly recognisable mark. As a logo it has the power to stand alone. It does not require the Michelin name to be attached. See the logo and you instantly know who is communicating to you. Like Nike, Apple, BP and Shell, Michelin has cemented it’s own iconic status in peoples minds.

Much more than a logo – Personality plus
“He’s much more than an advertising tool or corporate logo,” said Édouard Michelin, the company’s chief executive and the great-grandson of its co-founder. “He has lived through the whole history of the automobile. That gives him a status beyond any other type of corporate logo. He’s alive. No, really.” When Édouard made this statement he was exactly spot on. The Michelin man is alive. He exudes personality and emotion. You cannot help feel a sense of connection with him.

Street Cred
The true sign of a brand that has hit its mark and beyond is seen in street art and pop culture. The Michelin Man is seen throughout popular culture as a logo you can have a bit of fun with. Street credibility pushes beyond the suits and traditional marketing. When a logo is seen as touchable and personable by youth, it has the capacity to be re-energised. It ads to its relevance and enduring nature.

Michelin Man – Pumped Up
Those brands that take a flexible approach and imbue their brand with loads of personality over time can become cultural icons. Brands that become part of popular culture operate at an even more lofty position in the hearts and minds of consumers.

The Michelin Man provides us with lots of lessons and if you would like to chat about how to apply these lessons to your own brand, get in touch.

NEWS
News in that the Michelin Man to be given a makeover. Click here to read more.