He’s still the talk of the town, state, country and the world.

Eldrick Tont Woods known simply as Tiger Woods is arguably the greatest sports person of all time and is widely noted as the worlds first billionaire athlete.

After his arrival in Melbourne on Tuesday to compete in the Australian Masters at Kingston Heath Golf Club the media pursuit has been nothing short of relentless and as you can imagine has generated much fan fair on and off the golf course – put it this way, a door list was required for the media turnout during his first media conference at Kingston Heath with the room having to be resized to accommodate the throng of journalists and photographers.
I find it incredible that one person (one brand ETW) can generate so much interest and do so much not only for a sport but an economy.

It’s common knowledge that Tiger Woods’ appearance fee to play in the JB Were Australian Masters is reputedly $US3 million ($AUD3.2 million) with half this to be paid by the Victorian taxpayers – a small amount when you look at the economic benefit that’s expected to be generated for the State. At the press conference Premier Brumby said it was “fantastic for sport, fantastic for golf and fantastic for our state of Vctoria” but also went as far as to say that “we now estimate the economic benefit to Victoria will comfortably exceed the $19 million forecast,” and also said that “35 per cent of the 100,000 ticket sales has gone to overseas and interstate visitors”. It must be noted that I wrote this blog prior to Tiger winning the Gold Jacket (image) and Premier Brumby’s interview on Channel 9 to which he said, “the economic benefit to the State has super seeded all expectations and we’re now at looking a figure around the $25 – $30 million mark”. All this from one brand – Tiger Woods.

On the flip side it’s amazing to see what happens when Tiger isn’t on the playing circuit – notably when he was out after having knee surgery. I was reading an article written by Bob Grant from Grant Marketing and the findings are simply quite remarkable and he quotes, “we can’t blame Tiger for poor sales of Buick and the downfall of GM, but it is noteworthy that the viewership of the Buick International was down 57% without Tiger participating in the tournament” and he goes further to say
“I believe the Tiger Woods brand effect supports that a strong brand brings positive results, and when that brand is absent, companies and products suffer negative results. In today’s economy it is more important than ever to maintain a strong brand strategy”. So from my reckoning there’s an enormous amount to lose when Tiger’s not around but an enormous amount to gain when he is!

Not only is the economic benefit a massive win-fall for the State but we must also look at what the Tiger Woods’ brand is doing for golf in general. All week driving ranges and public golf courses have been booked to capacity (up by 300%) and golf equipment and merchandise sales have been at an all time high. Furthermore, there are some 360 golf clubs statewide who are all riding this Tiger wave hoping that the social golfer will take the plunge and join one of these clubs. Geoff Ogilvy (one of the Country’s best current golfers) told the media that he too is inspired by Tiger and that his appearance at the Masters has no doubt raised the profile of golf not only in the State but Australia wide. 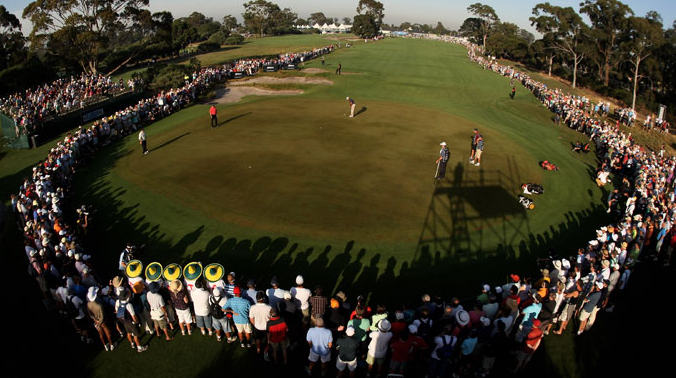 Australian Golf and the state of the economy are certainly not out of the woods yet (pun intended) but we must acknowledge the fact that when Tiger Woods drives (sorry flies) out of Melbourne he has basically generated an incredible amount of interest in the sport and generated some $19-$30 million into the Victorian economy.

If you’d like to talk with us about how we can help make your brand drive and avoid any bunkers give us a call.