An Absolut(ly) Iconic Ad Campaign
Since my days at design school the Absolut Vodka ad campaign has been hailed as one of the most unique and identifiable brand campaigns in history. The campaign began back in 1991 when Absolut began an art commissioning program to select artists from all 50 states in the U.S. Absolut Vodka arranged to run full-page ads in USA Today with images of the commissioned works every two weeks. Artists selected included Romero Britto, Jon Coffelt, Burton Morris and Rev. Howard Finster. A limited edition of 300 lithographs of each work were sold to raise funds for Design Industries Foundation Fighting AIDS and a book called; ‘Absolut Statehood: 51 Painters, Visions of Their Home States’ was published. The flexibility and creativity of the campaign gave it longevity and made the brand instantly recognizable in any medium.

How Do You Improve on Perfection?
The only problem with an ad campaign as iconic as Absolut’s is that at some point – no matter how great the campaign, the brand and its consumers will demand a new one. Advertising is a world inspired by freshness, and even the greatest campaigns eventually go stale in the hearts and minds of the market. For the people at Absolut, after nearly 20 years their campaign had begun to lose its magnetic attraction. And so they were faced with a quandary – how do you improve on perfection?

When Absolut came to this sticky cross-road they took the looked for and found a conceptual thread to connect their old iconic campaign with the new: commissioning artists to express their personal vision of the brand. They did this through the commission of film makers to make TVCs and built integrated campaigns around them. Here’s one of my favorites, ‘Absolut World’ featuring a group of artists who come together in locations around the world to create art pieces that spell out the philosophy of Absolut Vodka:

The ‘In An Absolute World’ campaign has extended to many such creative collaborations. Another of my favorites is this interactive music machine dubbed “ABSOLUT Quartet” commissioned by Absolut Vodka and envisioned by artists/technological sculptors/musicians Jeff Lieberman and Dan Paluska. This project combines the spark of creative thought with technological knowledge to create a unique user experience: 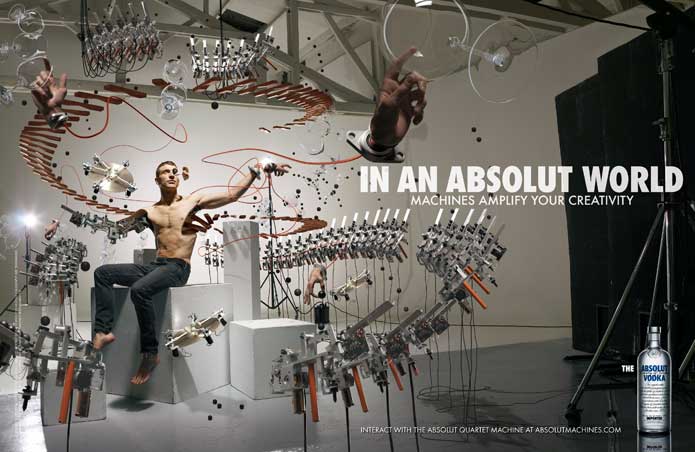 Try going to the site and submitting your own song and listen to the ABSOLUT Quartet improvise your tune.

In An Absolute World has translated into some less inspiring, although still creative campaign executions that for most other brands would be considered remarkable:

I applaud the abandon with which Absolut have thrown themselves into this new campaign, and it has plenty of scope to be taken even-further along the road of creative collaboration, embracing artists and providing (and rewarding) them with even greater freedom.Will the end result measure-up to the heights of their iconic campaign of the 90s? I doubt it, but success can still be found in staying true to their brand and continuing to striving for genius.

If you’d like to have an inspiring discussion about raising your brand to the heights of remarkability, why not give us a call – we’re up for the challenge.