It all Starts with Brand Clarity
Like all of the hardest working brand communication campaigns, this little gem for Mitchum from the US has at its core a clear brand proposition hard-wired with with customer benefit. Mitchum is an antiperspirant brand with a well defined proposition – America’s Hardest Working Antiperspirant. As with all brands – having absolute clarity around their brand strategy – what you stand for and your differentiated proposition provide the basis for creative communication campaigns that work harder and smarter than the rest. Mitcham took their ‘Hardest Working’ proposition and leveraged it into an integrated brand marketing campaign to find America’s hardest workers. However, not happy to sit on the strength of the idea, it is the quality of the execution of the Mitchum campaign that have delivered on the promise of the brand.

Building Brand Communication around a Central Idea
The more I looked at the Mitchum Hardest Working web site, the stronger the campaign became. Like an onion, the Hardest Working concept has layers of creative execution that fit together, building the momentum, strength and interest of the campaign. 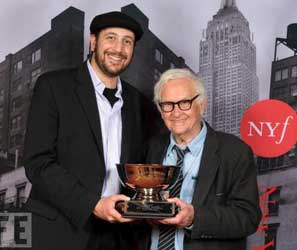 First there are the hard Working films, a creative collaboration between famed documentarian Albert Maysles and producer Bruce Kaplan that celebrate hard working Americans. Unlike much of the on-line integrated campaign content, the quality and integrity of the Mitchum campaign stems from the engagement of the highest calibre of  film makers. Albert Maysles (Director/Cinemetographer) was called ‘the Dean of documentary filmmakers’ by none-less than the New York Times. Albert Maysles and his brother David were the originators of the nonfiction feature film. Albert has received a bag-load of awards for his films including best cinematography at Sundance and an Academy Award nomination. Maysles has collaborated with Director/Producer Bruce Kaplan on a number of projects. Kaplan has worked for many years in film, TV and music as well as running numerous film companies and businesses in the entertainment and media industries.

Maysles and Kaplan have created a series of documentaries that are beautiful pieces of film making in their own right. These documentaries form the visual and spiritual platform for the rest of the campaign that lifts the brand and its messaging out of the quagmire of hand-held, low-budget on-line communication and up-to the hallowed realms of genuine entertainment. I could happily sit and watch this series of eight short films at any cinema and feel my evening had been complete. 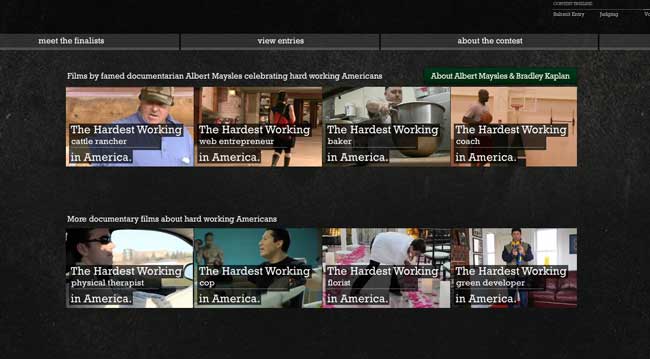 The Hardest Working films introduce us to the Hardest Working Cattle Rancher, Web Entrepreneur, Baker, Coach, Physical Therapist, Cop, Florist and Green Developer in America. The cinematography, sound and production quality deliver a rich taste of the colour and texture of the lives of these Hard Working people. 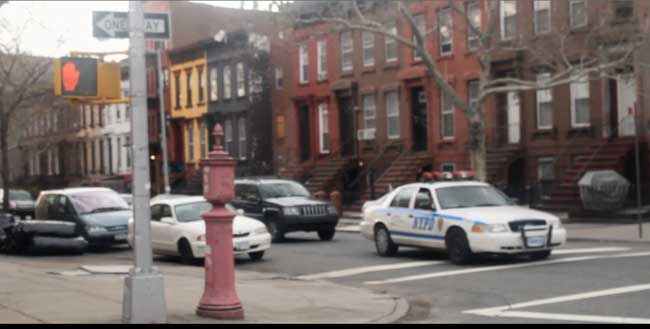 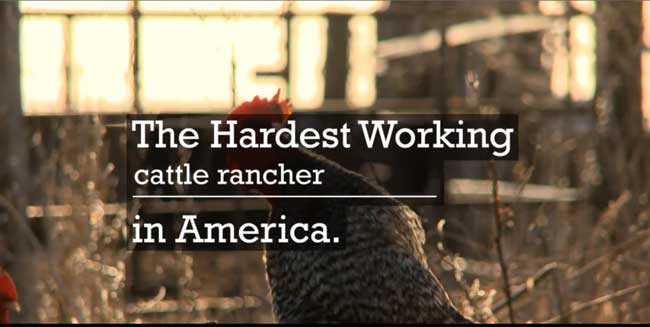 Integrating Brand Interaction
The magic for the brand, however, starts to dial-up in the other dimensions of the campaign. Americans are asked to, and have been putting forward their own Hardest Working nominations. These nominations become part of the campaign as participants vote for the Hardest Working American and in so-doing become woven into Mitchum’s brand storytelling. The Grand Prize of $100,000 and title of the Hardest working American is selected based on the votes of the ten finalists. There’s also a second prize of $20,000 (to the second hardest working American) and an Audience Award with a prize of $5,000 – a crowd pleaser – chosen out of all the entries. 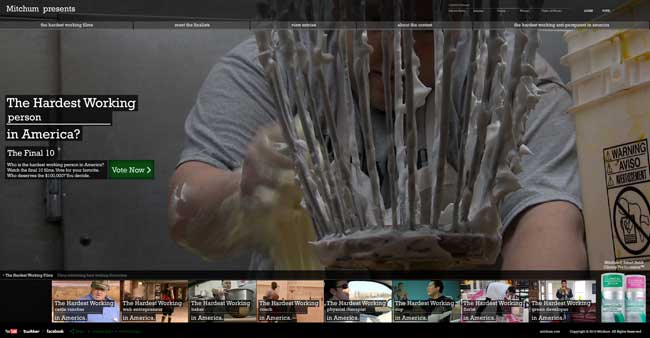 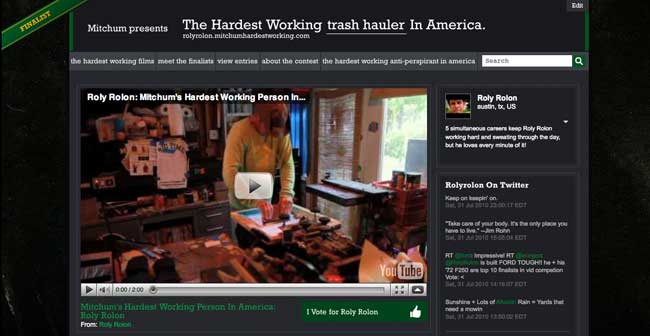 Recipe for a  Hard Working Brand Campaign
Virtually every line of brand communication in this multi-layered campaign fits together wonderfully. From the target market actualization, to the celebration and promotion of the Hard Working theme, from brand strategy to brand voice, from the audience engagement to the quality of documentary film making, from the product relevance to the leverage-ability of this idea, every aspect of the campaign is actively building brand meaning. This Mitchum integrated marketing effort must surely be a candidate for Hardest Working Brand Campaign.

If you’d like to develop an integrated marketing campaign for your brand, why not get in touch – we’d love to add the magic to the mix.