Smashing Brand Communications Campaign
Footware brand adidas spend more time than most thinking outside the box. And in this case the box is their take on the classic kids party game, the pinata. Teaming-up with sports shoe retailer Footlocker, adidas has put together an online campaign – integrating video and Facebook – to build awareness around the launch of their new range of Ciero skate sneakers.

The last time we had a kids party with a pinata, the results were nearly fatal. I mean, think about it – 20 kids hyped–up on red lemonade, a blindfold, a big stick and a stuffed animal full of candy. You couldn’t create a more explosive and potentially lethal scenario. So the idea of taking this mayhem on-line seems to make alot of sense – even if just to make sure no-one takes their eye-out.

The video is sweet, it carries the level of cool, urban production quality we expect from adidas. The clip – featuring Australian skaters Jack Crook, Tom Snape and Aaron Winsbury, BMX rider Leigh Giason staging an impromptu street party and smashing open a giant pair of adidas Ciero piñatas. The folded-paper typography for the campaign is a brand design bonus – you just gotta love that creative detail. 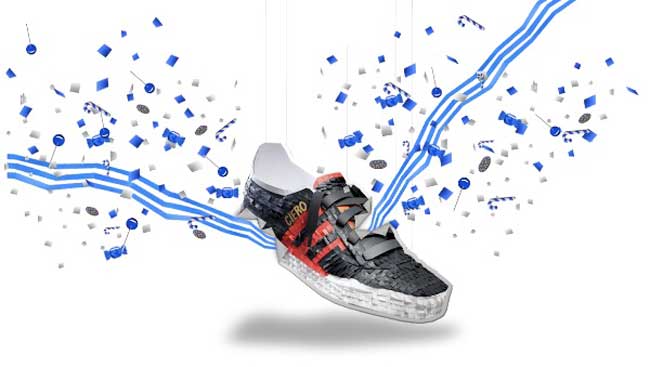 Unfortunately the game itself is pretty lame-o. It has the usual pass-it-on, win a prize scenario; the person who starts the Piñata that gets smashed and passed by the most people takes home a PS3, Xbox 360, Wii, DS Large and $1,000 worth of video games. And everyone who smashes and passes a Piñata goes into the draw to win secondary prizes, including a Foot Locker gift voucher valued at $150. It’s housed on the Footlocker site, and the Footlocker brand is just never going to carry the same level of tribal cred that adidas brand does – that’s just the reality of retail co-branding in Australia.

So here’s the issue for adidas; they can create all the ‘out of the box’ integrated brand campaigns they like, connecting with their urban street tribe, but the minute they try to integrate that campaign in-store (beyond the influence of their brand and through retail partners) the brand integrity becomes compromised – even in the online environment like this campaign. In a small market like ours, that’s one curly brand conundrum.

Dave Ansett, Brandamentalist
For monthly updates of our thinking, click here to receive our free Brand Newsletter
Brand Designer and supporter of giving blindfolded kids a semi-lethal weapon in the name of confectionery.