Coles Supermarkets in Australia has for years sat back and watched its formidable competitor Woolworths claim the market positioning of being ‘The Fresh Food’ people. It is a positioning line that is strongly recognised and recalled amongst consumers. In recent years they have successful reinforced it with their revamped logo and weekly fresh produce updates on National TV. At the same time Coles has really not owned any consistent positioning. It has simply been seen as playing second fiddle to Woolworths.

Having now been under the ownership of Wesfarmers for almost 3 years, one has been witnessing a strong focus on back office processes and a price positioning strategy at the front end. A little over 1.5 years ago Citi retail analyst Craig Woolford (Sydney Morning Herald 17 March 2009) was suggesting that Coles could grow their sales by simple cultural and management changes, such as promoting its competitive pricing. 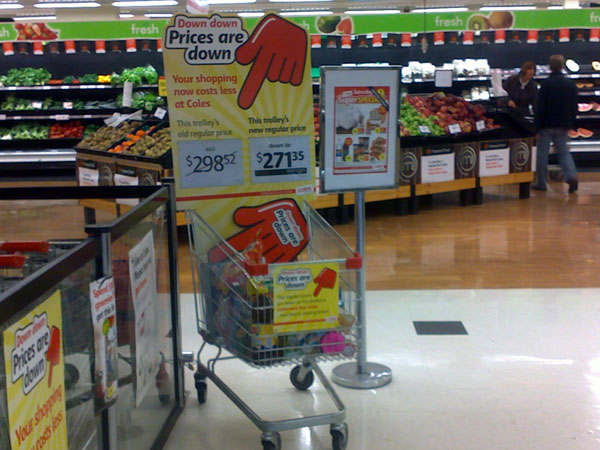 And that is exactly what it has been doing with its Down Down price campaign. Promoting permanent price cuts across every day products. Interestingly, Coles have resorted to similar strategies under previous management, but it has always proved difficult to sustain, and has really never served to strike an emotional chord with shoppers. This time around it is likely to be no different, particularly when you get Choice reports (July 2010), commenting on their comparative shopping excursions over time, and recommending: ‘Don’t change where you shop based on a supermarket’s claims of lower prices. The price reductions only apply to a limited range of products, and they might not be the ones you trust or buy regularly.’ The fact is that Coles prices have increased less than inflation with an overall 1% lift for the year 2009-10 (The Age October 6, 2010) and their market share is increasing. So on the surface the Coles brand is having some success, but they were coming of a low base!

Price is certainly an important factor, but it is not the foundation that Coles should be building its market positioning on. It can only prove to be problematic, with such a powerful competitor as Woolworths able to match their moves over time. Yes, it is fundamental that Coles be competitive, but we suggest another proposition with a more emotive hook would better serve their cause. To that end we recommend that Coles become obsessive about owning the Natural Food Purveyors position.

The brand has already demonstrated a propensity for the space with their decision to only sell meat that is free from hormone growth promotants, from January next year. This comes on the heels of the decision to remove pork produced using sow stalls from its shelves. Offering a broad range of natural products, concerned with how they are produced (from a chemical, animal welfare and farming perspective), and merchandising them in a compelling manner, would allow them to claim a space that is wide open and increasingly relevant to consumers. Add to this truly transparent labeling information on the origins and ingredient make-up of all products, and one would truly begin to think that Coles does stand for something distinctive. Coles needs to go on the front foot with a proposition that declares to the world that they stand for something positive (and noble!). Recent research by Legal and Accounting group MSI found that from a trust perspective Woolworths was perceived as being way ahead of Coles, 44% versus 25%.

Perhaps building a proposition around being the Natural Food Purveyors (or an alternative word to purveyors…but we cannot use people, as someone in the sector owns that!!)  may seem a little challenging to the Coles team (and some suppliers), but they need something bold and purposeful if they are to claim a relevant and meaningful proposition that connects at a more emotive level with customers.