I’m Here is a 30-minute short film about a love story between two robots, written and Directed by Spike Jonze. The sad-eyed robot librarian Sheldon (Andrew Garfield) leads a lonely and methodical life, until he, one day, he meets Francesca, a creative and free-spirited female robot (played by Sienna Guillory). Robot romance develops and the story is just as beautiful as it is unpredictable.

Absolut Vodka collaborated with Spike Jonze to bring ‘I’m Here’ to a  global audience by re-creating the cinema experience online, by limiting the amount of (tickets) viewings to 20,000 per day and linking into social media so the film can be watched online with friends, a terrifically great idea in its own right. 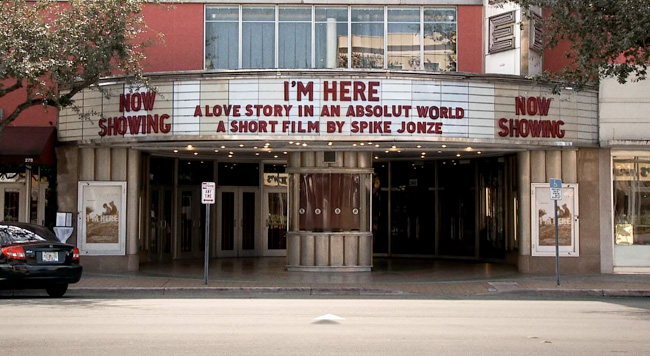 Absolut Vodka’s involvement in the project is wonderfully understated. The short film is devoid of Absolut advertisements or product placement. Brands are complex beings and this type of soft brand association will give Absolut long-lasting cultural significance long after the hype of the film has passed. As Anna Malmhake, Vice President Global Marketing, at Absolut explains, “I’m Here marks an evolution of our longstanding commitment to creativity, and I am incredibly proud to make this film available to a global online audience. Spike Jonze has made a magical short film, which takes our creative collaborations to new heights. We could have done a commercial or a print campaign, but this is so much more interesting. And much more ABSOLUT.”

Absolut have approached their involvement with Spike Jonze from a sensitive and culturally aware position, that will pay dividends to the Absolut brand equity for many years to come. It also reminds us how all brands need to think about the need for instant gratification and slow burning cultural impact to build a holistic and lasting brand.

Here is the trailer for the short, but it is definitely worth watching this amazing film and noting the Absolut partnership, get your online tickets at www.imheremovie.com

If you would like to know more about the levels of brand communication you brand can own drop us a line.