After spending millions trying to distance themselves from the other ‘big 4’ banks, NAB did once again, but in all the wrong ways last week.

Since the Valentine’s Day stunt, NAB had been slowly regaining the public’s trust. They’d reduced fees, rejigged products and worked hard to convince us they are different. But all this hard work and investment to distinguish the brand was undone with one ‘off-brand’ decision.

Last week, NAB was the only major bank not to pass on the full Reserve Bank interest rate cut. NAB chose to only give back 20 instead of the full 25 basis point cut. It might be only a small difference of .05% but it is the perception that matters. It’s definitely not ‘more give, less take’, it’s quite the opposite.

After initially resisting, I am going to weigh into the debate because I am shocked that NAB don’t seem to get the damage they’ve done to their brand.

The debate has raged with NAB trying to justify their decision by claiming that they still have the lowest home loan rate of the big 4. But most people aren’t buying this, especially as smaller banks and credit unions have lower rates than NAB – and they all passed on the full 25 point rate cut.

For brands, perception is everything and NAB has reneged on their brand promise of ‘more give, less take’. Their actions have left them open to attack and that’s just what Bankwest did with this quick response campaign (spotted on Mumbrella). 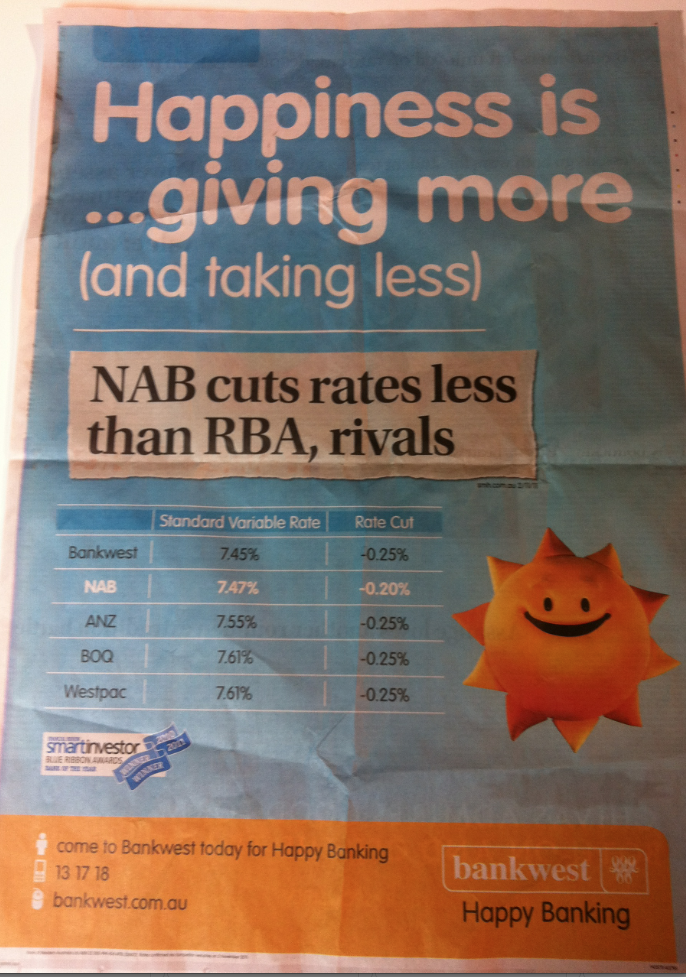 For a brand that invested so much in differentiating itself from rivals – how could this decision be made without considering the brand implication?

Once again, it shows the lack of true brand understanding at the executive level. Their attitude is pretty clear: ”It will be what it will be” Mr Clyne, CEO of NAB told The Sydney Morning Herald.

NAB has demonstrated a blatant disregard for its customers and shot the reputation it has worked so hard to build in past year. With one greedy decision, the bank has fuelled the ‘corporate greed’ debate once again. But more importantly, this decision highlights the lack of alignment between what the bank says and what is does.

What is really disappointing, NAB was beginning to set an example for the big 4 banks. Beyond the marketing fluff there seemed to be some substance behind the campaign. It appeared that NAB believed in their brand and were starting to deliver their brand promise with considered changes in their products and their behaviour. The rate decision has undone most of this hard work and it will take some time to ‘mend’ the damage.

NAB employees must be wondering what the brand stands for now and will need some direction. The marketing team will no doubt be regrouping, but upping the media spend and throwing attractive offers won’t be enough to regain their brand credibility. Some genuine brand gestures will help, but it is essential that NAB put ‘brand’ at the heart of the company.

NAB needs to ensure everyone understands the brand and is engaged to deliver the brand promise. This needs to start at the very top, especially as the executives seems to be wondering what all the fuss is about.