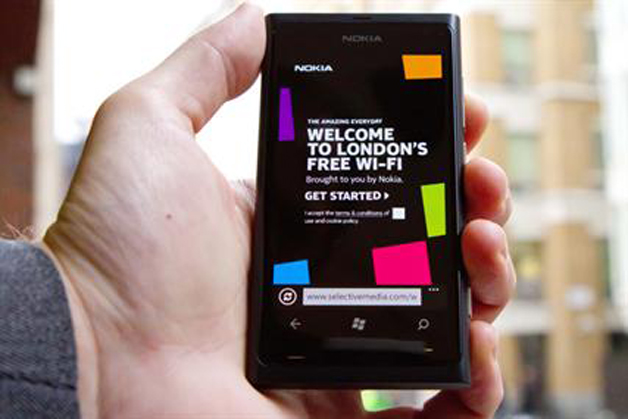 Remember Nokia?
The brand that was on the brink of extinction is back in the spotlight with a new way to deliver on their brand promise of ‘connecting people’. This week, Nokia launched a clever brand gesture to provide free Wi-Fi to Londoners and visitors to the British capital. Is this just what the brand needs or is it too little, too late?

After struggling to stay on the consideration radar, this seems like a smart move by Nokia. It adds value to the brand experience and is generating significant attention for the company. In the UK, almost every major channel as well as specialist technology and marketing publication is talking about Nokia again.

‘The Telegraph’ reports that the service works on any device including laptops and tablets. It does not give preferential treatment to any network, operating platform or brand.

While other companies run similar services in London, the appeal of Nokia’s service is that it is free and for everyone. No subscription is required. You can simply search and select it within coverage areas and then surf without giving any personal information. Nokia is hoping that this grand gesture will re-ignite interest in how Nokia ‘connects people’, address their ailing market share and in particular, promote their first Windows-based phone, the ‘Lumia 800’.

Ironically, most people using the service are probably using the very devices (including the iPhone and BlackBerry) that have helped diminish the Nokia brand.

But Nokia is not giving up. Craig Hepburn, Director of Social and Digital Marketing at Nokia, told ‘Marketing Magazine’, “The service is also intended to get consumers to share moments.” If this works, it might succeed in getting people to engage with the Nokia brand again (and a whole new generation who have never heard of Nokia).

However, the real benefit for Nokia might be in the data they collect. Nokia confirmed to ‘The Inquirer’, “no personal information will be collected, only information about which devices are being used to access the internet, how long the service is used and the type of web sites are being accessed”.

For a company that has struggled to keep up with the likes of Apple, maybe this live consumer insight is just what they need to help get their brand back into a leadership position.

As more of us become addicted to our smart phones, spending significant time using them to do everything from emailing to watching television, the data costs are becoming significant (especially when roaming). This is a genuine brand gesture that may endear Nokia to smart phone users again.

Unfortunately, like many previous Nokia loyalists, I’ve move on, several years ago. Attracting iPhone users like me back, is a big ask. But if you’re an Android user or looking for a windows mobile phone – maybe it will appeal to you.

Nokia will probably never regain its handset leadership position, but its future could still be about ‘connecting people’. It might just require a shift from ‘providing the handset’ to ‘enabling the connection’.

The London service is provided in conjunction with Wi-Fi provider Spectrum Interactive. The trial phase will finish at the end of December. However, if successful, Nokia plans to add 1,000 hotspots around London, and may eventually roll out in other major cities around the world, reports ‘wired’.

I wait with anticipation for them to ‘connect’ us here in Oz.