Colour is often talked about as a powerful brand asset. It can distinguish your brand from others in the market or indeed separate different products within your brand range.

Changing your primary brand colour, even for limited special seasonal packaging, can backfire as Coca Cola have learned in the USA. 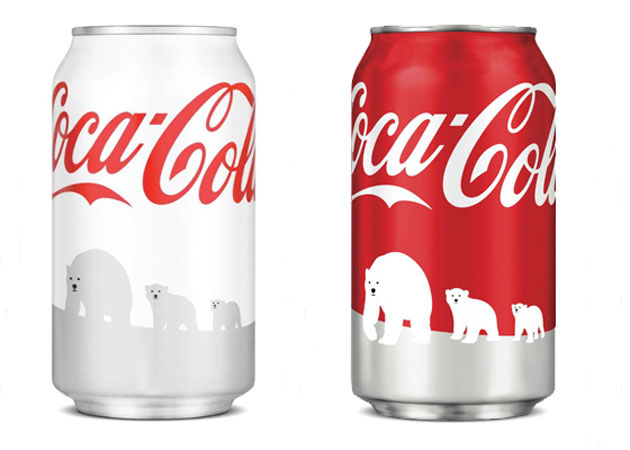 The launch of special seasonal designs for the cola giant is nothing new, but this year was the first time Coca Cola deviated from ‘red’ to launch a polar design on a white can.

The snow white design was part of a World Wildlife Fund partnership and the Arctic Home Campaign to highlight the global warming threat to bears’ Arctic habitat.

However, the ‘white’ caused confusion and a string of complaints on social networks in the USA. Many criticised the company for messing with ‘their’ brand and some believed that the changes even impacted the actual product.

In particular, the white was seen as too similar to ‘silver’, the colour associated with Diet Coke, the low calorie sibling that has very distinct product attributes and audience.

The Wall Street Journal reports that customers responded with hundred of tweets that accused Coke of ‘trickery,’ and labelled the white cans as ‘blasphemy’.

Scott Williamson, a spokesman for Coca Cola told the Wall Street Journal, “The white can resonated with us because it was bold, attention-grabbing and reinforced the campaign theme. Coke’s marketing executives wanted a ‘disruptive’ campaign to get consumers’ attention, he says.”

The extent to which colour is ingrained on the minds of your audience, not just for brand recognition but also aligned to product attributes should not be underestimated.

Coke is red and even for a good cause; it appears that some consumers’ feel that is something you shouldn’t mess with.

This illustrates the extent that consternation occurs and probably always has done when you alter a critical brand asset. Only now, social media gives us a window into the world of our customers and we can very quickly get a sense of their anxiety.

They certainly created some disruption, but the lesson for Coke, like any brand considering packaging changes, is to ensure that a short term campaign doesn’t cause lasting damage to the brand.

It is important not to deviate too much from the core brand assets and in doing so, cause confusion or alienate your core audience. You need to think carefully before you change any of the visual cues as this could significantly impact the meaning of the brand communication and its relationship with its audience.

To counter some of the public debate Coke was forced to issue a ‘fact sheet’ about the white coke cans and how to distinguish Coke from Diet Coke. Issuing fact sheets was the start of the end for the white cans. The admission from Coke that the colour switch was causing too much confusion and potentially damaging the brand, soon followed.

Initially planned to run through until February, the white cans are now to become extinct much earlier. The polar bear design has now been updated with the traditional coke red colour and will gradually replace all the white cans in stores across the USA.

Interestingly, most tweets since the announcement have been about quite negative about Coke retreating from the white can. In particular, there still seems to be some confusion that the whole campaign has now been dropped (which it hasn’t).

The WWF bear cans are not being used here in Australia as Coke continues with their ‘share a coke with your buddy’ summer promotion.

Nike Masters the 80:20 Rule of Branding

Not all brand activities are born equal. This is a brand principle that Nike know better than most brands as the recent release of the ‘Nike sole’. The Nike...

Brands that give a shit

Poo Pourri lacks an odor but big on brand voice In September my business partner Dave wrote a great blog on the toilet paper brand Who Gives a Crap....

From a technical perspective, developing unique visual properties for your brand should be a critical deliverable for every brand identity project. But then, beyond that is the magic that...

Today’s post is unashamedly for our brand design obsessed readers. Apologies to those who don’t suffer this affliction, but for those who do – enjoy! Archivio Graphica Italiana is...

The Biennale of Sydney ends 40 year relationship with Transfield. Several weeks ago, a friend came to me with a dilemma. As a contributing artist to the Biennale of...