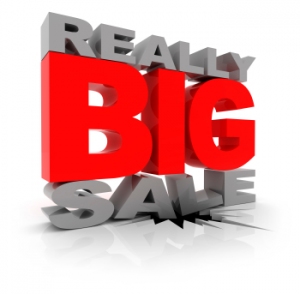 You’ve only got to turn on the tele or open a newspaper to be reminded of the obsession we have in this country with retail price discounting. Whether selling doors or doormats, books or bras, televisions or toys, having a Super Summer Sale or a Massive Markdown Madness is the fall back marketing strategy of choice for many Australian retailers.

When the CEO wants to see a quick boost in sales, when the competition is gaining market share, when there was a sales spike the same time last year that needs to be replicated or when there are just no more ideas in the tank, an over-excited voiceover bloke with a chainsaw is the go-to guy. And if you think Australian consumers benefit from all the madness, you only need to look at the price of stuff overseas to realise we’re getting a raw deal as well as a raw ear.

Pricing is and always will be an important part of the marketing mix, but all too often for Australian retailers, it becomes the entire marketing strategy. ‘We do widgets cheaper than our competitor’, the message goes, ‘so what else do you need to know?’

Well, I dunno, maybe something about service, or value, or convenience, or quality, or range, or how special/sexy/important your brand will make me feel. Anything really. Because your competitor is actually saying they do the cheapest widgets too, so I don’t know who to believe.

Occasionally you’ll see these same brands try to do something radical – like run a campaign based on a point of difference or a consumer insight. But it’s usually only for a few nervous weeks, maybe months, before they go rushing back to the warm comfort of a Super Sale and a loss-leader.

So do we really think “The boss has gone bonkers!” is an ingenious way to push the consumers’ hot buttons, or is there something else at play here? Our fixation with competitors seems to be at least part of the problem. How many sales or marketing meetings have you been to where more time is spent worrying about what the shop around the corner is up to rather than what the target market wants? Keeping an eye on and understanding your competitor is important. But it can easily become an unhealthy obsession. And when that obsession becomes widespread, price quickly becomes the battle ground.

Coles and Woolies aren’t the only culprits, but given that they control over 70% of the grocery market in Australia, they justify a mention. Putting all the furore over cut-price milk and beer aside, the Woolworths advertising campaign in response to Coles’s ‘Down Down’ strategy, was one of the least creative and lazy me-too campaigns in recent memory. With all the publicity surrounding the Coles strategy – much of it negative – they missed a unique opportunity to come out with a differentiated proposition (quality, for example, or better relationships with Australian farmers). But instead they chose to revert to the safe and easy route of substituting an oversized red finger for an oversized green boxing glove.

And where are Coles and Woolworths now? Back where they started – selling stuff for the same price as each other – only now they’re making less margin.

The same game is played out by retailers in just about every category – from electronics and carpets to phones and furniture. The problem is, you’re never really going to grow market share, loyalty, or, god forbid, the category, by taking part in the frenzy.

So who’s to blame for the marketing mayhem? Talk to most marketers and advertising executives and they’ll passionately tell you that price is not a strong, sustainable or ownable differentiator. My guess is that, in many cases, sophisticated, well thought-out campaign ideas are chipped away at by paranoid MDs and FDs nervous about satisfying impatient shareholders and fearful that their competitors might steal some quick market share. The prices get lower, the headlines more shouty, the art direction more desperate until you’re left with another off-the-shelf “It’s all gotta go!” gem. Or, in the case of Woolworths, more and more elements of the competitor’s campaign are added until finally someone gives in and briefs the agency to just copy the Coles ad but make it green.

But marketers have to take some responsibility. Clearly not enough is being done to convince the powers that be that a long-term, differentiated strategy based on consumer insight can actually work.

And it can. In the UK for example, supermarket and department store chain Marks and Spencer created a point of difference, and a whole new category, when they launched quality dine-in bundles (two courses, a side and a bottle of wine for ten pounds). Tesco has expanded through product innovation and diversification – into technology, DVD rental, even pet insurance. Sainsburys have benefited from being the first to sell fair trade items and de-range battery eggs. And that’s just supermarkets and only in the UK. Other global retailers are setting themselves apart through service, range or added value.

Start putting your case together now. Because sooner or later someone will break the mould, come out with something completely different and grab a whole heap of market share. And that really would be CRAZY! CRAZY! CRAZY!

James is a freelance copywriter and marketer from Melbourne, Australia.
He is regular contributor to titles such as The Melbourne Age, The Sydney Morning Herald and Marketing Magazine on topics as diverse as Barbie’s 50th Anniversary, why your company didn’t invent the iPod and how the Australian parliament could be turned into a reality TV show.
In another life James was Marketing Manager for STA Travel (both in Australia and the UK) and now freelances – as a copywriter and marketing consultant – for a number of brands and agencies.
To contact James or to read more of his writing, visit www.jamesschloeffel.com