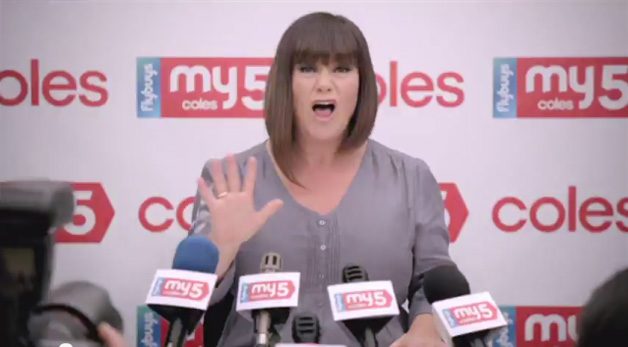 This continues their strategy of using celebrities as the face of the brand. It has worked in the past, but is Dawn the right ambassador?

The new campaign is the supermarket giant’s latest attack on their nemesis, Woolworths.

Network television was road blocked on Friday night, followed with a heavy schedule throughout the weekend which is expected to continue for the next few weeks – they are spending millions on this.

At first glance I thought it was a commercial for Tesco, or perhaps another British brand. But no, the ads are definitely for Coles and there doesn’t appear to any British link (other than the marketing team behind this).

Simon McDowell, Coles’ Marketing Director, told B&T they chose Dawn because she “represents the spirit of flybuys and Coles” and that the ads “capture the moment and the hearts and minds of Aussie families.”

One of my colleagues’ response was “who is she?” My son screamed at me, “she is so annoying”. But my wife thinks she is “very funny and plays the role well” – so it is a big tick for her and maybe that’s what they are looking for.

For me, she is the first person to grab that ‘big red finger’ and actually make me laugh, not cringe!

But even though I am a fan of Dawn’s, I am struggling with Coles’ rationale for choosing a British comedian to be the ambassador.

While I don’t believe you have to be British to appreciate Dawn; if Coles want to relate to Aussie families, perhaps a British comedian is not the best choice.

The right celebrity can help build a human face for a brand and make it easier for the audience to relate to the brand. But this also carries considerable risk as the celebrity’s personality can smoother the brand’s persona and even alienate customers who do no like or relate to the person.

For Coles, Dawn could either be seen as refreshing, or demonstrate just how they are out of touch they are with everyday Australians.

A B&T reader comment from James, sums up my concern; “If Coles is all about Aussie families why do we need a Brit to be the face of these adverts?”

Is Dawn good for the Coles brand – what do you think?