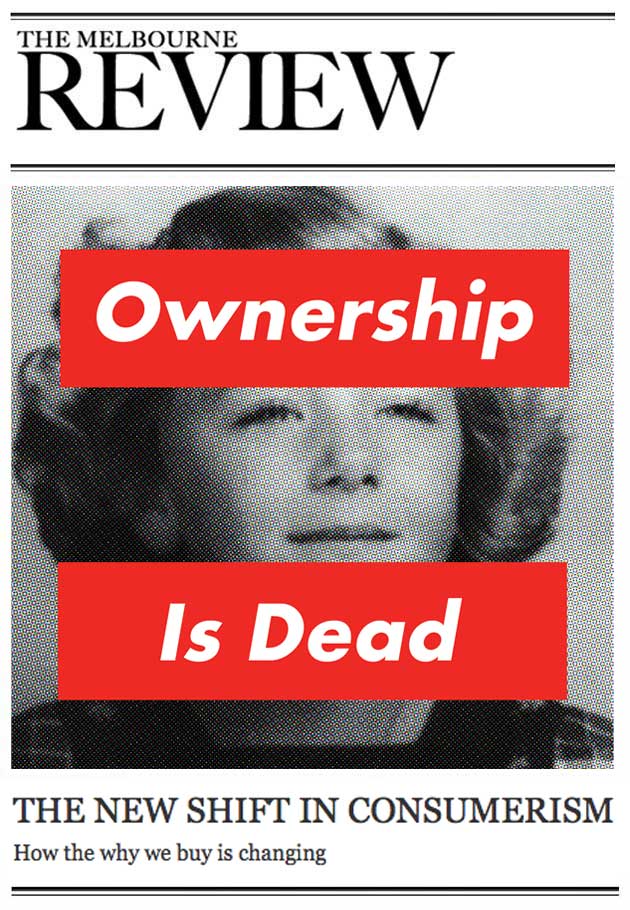 The concept of shopping is shifting and the trend is away from owning stuff. After decades of relatively static consumer trends, we’re seeing a profound movement in the reasons why a growing number of us are buying. This profound shift is not being driven by manufacturers, retailers or brand owners, but by a changing mindset – away from owning to doing.

This type of movement – or at least the green shoots we’re observing – does not come about every day. As consumers we’re creatures of relatively predictable habit. But the convergence of a number of significant factors appears to be freeing us of our old ways and opening up the possibility of a new mindset towards the way we choose to spend our hard-earned.

The last four years have seen a once in a lifetime change to the world’s economy. We’re living in a new economic reality, and the psychological impact of that change on consumers is still playing out. Derek Thompson, senior editor at The Atlantic points out: “The Great Recession didn’t just postpone financial independence for millions of young Americans. It also changed our attitudes about what it means to be an adult. The new economic reality is changing the way we think about adulthood. It’s not that adulthood has changed, necessarily, but that the road to financial independence is getting longer and more fraught.” And whilst unarguably the millennial generation have been hard hit by the new economic order, the shift is not an entirely new phenomenon. As Paul R. Abramson and Ronald Inglehart suggest in their book Value Change in Global Perspective published in 1995, “the gradual shift from Materialist values (such as the desire for economic and physical security) to Post-materialist values (such as the desire for freedom, self-expression, and the quality of life) is in all likelihood a global phenomenon.”

Technology too is playing an active role in the changing way we view ownership. Facebook, YouTube, Wikipedia and iPhone with its millions of apps don’t fit into the traditional monetized economic models. Many of these technological breakthroughs have become endemic to whole generations. They produce significant gains in terms of happiness and connectedness (even if online), but little in terms of economic gain. These products cost nothing to consume and are often produced by people working for free or for a shared cause. From images on the web to open source software, from free apps to streamed digital content, never before have we had access to so much without having to pay a cent for it, and this is impacting the expectations of consumers across a growing number of categories.

Spotify is an online music service that typifies this trend. Spotify offers free access to more than 16 million songs streamed through your computer. With playlist and social music sharing through Facebook, Spotify threatens to do to iTunes what iTunes has done to the traditional CD market.

Another significant influence on the way we are behaving as consumers is the emergence of collaborative consumption. We’re seeing the resurgence of traditional forms of sharing, lending, bartering and borrowing applied to things we’d only ever previously owned outright, all enabled by new technology. Shared ownership is a form of this behaviour where a group of like-minded people pool their resources to purchase something together. Sometimes called the ‘access economy’, this is another example of the transfer of investment from owning to doing. Savvy entrepreneurs are scaling the concept commercially with business ideas such as GoGet. GoGet members have access to a growing network of new cars available to use when they need them without the hassle and expense of individual car ownership.

A large part of the reasons why we buy has always been social. For a multitude of reasons including ego, social status and positive self-perception we’ve always enjoyed telling others about what we have bought. Yes the joy is partly in the owning, but also very much in the sharing. As Josh Allan Dykstra, founder of consulting firm Strengths Doctors frames it, “When we share something we like with people we like it creates a bond, and this is meaningful”.

People are becoming more switched-on to buying things because of what they can do with them. Dykstra goes on to point out that “the product or service we deliver can help people do something important (if only to them), and this connects people to a sense of empowerment. It helps them feel less like spectators in their own lives, and gives them a greater sense of autonomy and action. In other words, the reason we acquire ‘stuff’ is becoming more about what we get from the acquisition. Purchasing something isn’t really about the thing itself anymore. Today, a product or service is powerful because of how it connects people to something – or someone – else. It has impact because we can do something worthwhile with it, tell others about it, or have it say something about us.”

A recent study from the University of San Francisco has shown that people who spend their money on buying experiences are happier and more fulfilled than those who buy material possessions. Ryan Howell, assistant professor of psychology at San Francisco State University who headed-up the research project concluded: “Purchased experiences provide memory capital. We don’t tend to get bored of happy memories like we do with a material object. People felt a greater sense of vitality or ‘being alive’ during the experience and in reflection,” Howell said. “As nice as your new computer is, it’s not going to make you feel alive.”

For brand owners and managers the game is changing, and those who adapt to the new drivers of ‘why we buy’ will have more success in forging real and long-lasting connections with consumers.