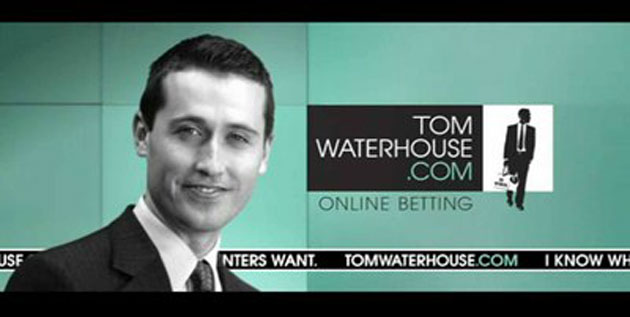 For anyone who lives in Victoria, Australia and does not know who Tom Waterhouse is, then I apologise for raising his name. For the rest of we Victorians, we have not been able to escape Tom’s advertising campaign promoting his online gambling business. For anyone who wants a punt, Tom’s your man, as he so sincerely informs us  …”I do know what punters want. Four generations of Waterhouse betting in my blood tells me what you want”.  The message from his ads is that while he is clueless on being a sportsman, he understands the most vital accompaniment to sport like no other in the country in the form of an interest stimulating bet.

He is young, cool and technology savvy, with the horse racing in his blood line – what more could you wish for, particularly if you are Gen Y? He has been running a truly omnipresent campaign at every major sporting event, advertising on TV, in papers, online and even on a Melbourne tram for those who may have missed him. And if you seek him out he will happily be part of your life through his website, twitter and other forms of social media.

While I am not a punter, I think Tom has done something very positive for the marketing fraternity. He has created a big, in your face integrated campaign that represents a superb case study for others to learn from. What we need to know is what has been the return on investment – what market share has he picked up and what has that translated into in terms of bets? There are seven online wagering companies in Australia, and all but Waterhouse’s have “bet” in the title. His personal approach appears a reasonable point of difference from  competitors (albeit some like Sportsbet have been an innovative force in their messages), and the production qualities and distinctive nature of his advertising all suggest that it is reasonable to expect that he may get a pay-out.

However his father Robbie Waterhouse was recently quoted as saying his son’s strategy was to be “growing broke”, and with an estimated marketing spend of about $20m a year it is a very serious wager.

Not everyone likes what Waterhouse has been doing. There are those who feel (with some justification) he is glorifying gambling, making it seem a very cool, natural thing to be doing. And there are blogs like, ‘Things Bogan’ (yes, not really Tom’s market) that describe what he is doing as….’Waterhouse, scion of Gai and Robbie (son of Bill), is attempting to parley his family heritage at setting profit-making odds for mug punters or training large mammals to run fast while bearing a diminutive, whip-toting pilot into a suave, 21st century gambling empire. The bulk of this is done through plastering every sporting event in the world with his plastic, smirking mug via any medium possible.’

But Tom Waterhouse clearly thinks he is on a winner, because backing winners is his game. Tom certainly knows the odds are in his favour, if he can get us on board. In a study completed by The Economist in 2010, Australia was the world’s biggest gambler per capita. With the loss per resident adult reaching nearly $1,300 annually. This is more than double the third highest nation (which is Ireland) of under $600 a year.

From a marketing case study perspective it would therefore be great to know just how much of a mug we have all been to the Tom Waterhouse onslaught.