With Christmas just around the corner, brands everywhere are fighting for our attention.

Amongst the Christmas clutter, the TAC created a powerful pop up display in the city that helped create a deep and enduring impact.

Victoria’s TAC has a reputation for creating powerful advertising campaigns that have been awarded and inspired campaigns internationally.

Their focus has always been on driving compelling emotional connections to change behaviour. Many of the TV commercials are extremely graphic and while they have worked in the past, there is a sense that the public are becoming immune to horrific imagery.

This year, they installed a massive riverside dining table at Southbank. As thousands of shoppers, commuters and workers walk by, a simple dining table created a powerful disruption to their routine.

A single sign was at the head of table. “This many people won’t make it to Christmas lunch. This table has been set to remember the 259 people who lost their lives on Victorian roads this year.”

Ted Ballieu, Premier of Victoria, explained that “each of these empty settings represents a Victorian who lost their life on our roads this year, and a family that is grieving because a loved one won’t come home this Christmas.”

The table was cleverly laid with different chairs to represent different people, of all ages and walks of life. Most touching were the high chairs and children’s plates.

On approaching the table with my children, they both inquired about what this was and we were forced to explain. We noticed many other families doing the same.

The opportunity to place a candle on the table further engaged us in the experience.

The message was simple and powerful. “We’ve set this table as a reminder to drive safely and take care on the roads this holiday season”.

This is part of a social media campaign with the hash tag #aplacetoremember. 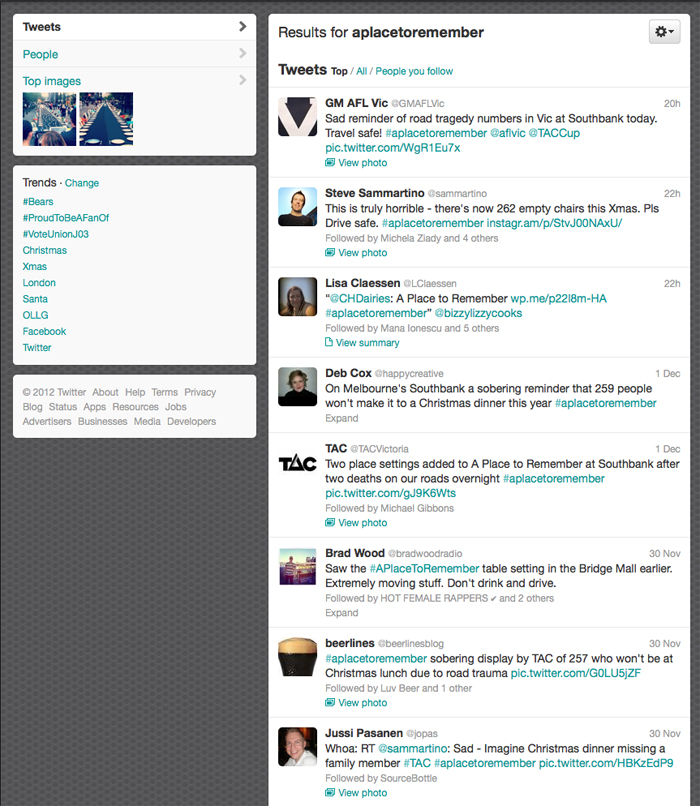 A similar table was been set up in Ballarat’s Bridge Mall.

This is a great example of how a simple idea can create such a powerful brand impact on its audience. The table has now been removed, but the image has certainly stuck with me, much more than the television ads.