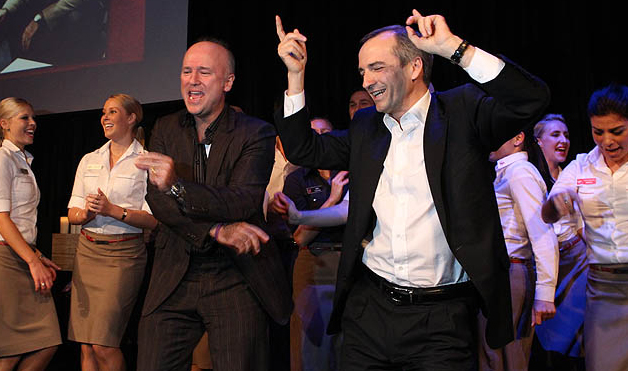 Virgin Australia’s  John Borghetti has all the moves!

For as long as Alan Joyce has been CEO of Qantas he seems to have been at logger heads with key stakeholders. Not so long ago it was with his pilots and currently it is with a bunch of dissent shareholders who think they could drive out a better result for Qantas. His life is even more complicated because the disenfranchised shareholders include previous Qantas CEO Geoff Dixon. It is not simply because Dixon is an ex CEO taking pot shots at Joyce, it also because he is Chairman of the Australian Tourism Commission, of which Qantas has been a long time sponsor.

Alan Joyce has responded by going on attack, as he did with the pilots dispute, and on this occasion called out Geoff Dixon for a conflict of interest and withdrawn sponsorship of the Australian Tourism Commission. When all this was playing out a week or so ago, my immediate reaction was to ponder the stresses associated with running publicly listed companies. Alan Joyce has to have one eye on implementing strategy and one eye on managing minority shareholders intent on making his life difficult. Life would be a lot easier of course if Qantas share price was not near record lows.

But the real mind games are not to be had with Dixon and his band, rather it being to played out with Alan Joyce’s ex Qantas colleague John Borghetti, who is the CEO of his major competitor Virgin Australia. Borghetti is going after Qantas big time and what is interesting is that his initial moves appear to be to mirror the operational structure of Qantas, but do it better. He has made a swift and direct line for the business traveller and corporate accounts. He is also seeking to replicate Qantas multi-brand strategy, by making a bid for low price carrier Tiger Airlines. If the Tiger deal gets across the line, Borghetti will have Virgin as a full service brand to compete with Qantas, with Tiger able to go head to head with Jetstar.

There is an argument to say that to date Borghetti as not been particularly innovative, he has simply mimicked his key competitor, when one may have been suggesting that he should be carving out a more differentiated strategy (because isn’t that what the text books call for!). But there is something very cool and confident about the way Borghetti plays the game. He clearly feels that operationally he can do it better than Qantas, and why not he had 36 years at Qantas understanding how they do it (or don’t do it).

Since being at the helm of Virgin he has had kicked some big goals but he is suggesting it is only just starting to hot up. Borghetti was quoted in the Financial Review Boss magazine as saying, ‘…..I think the next two and half years is going to make the last two and half years look like a walk in the park. I know what is in my book and I know I can do it.’ The book Borghetti is referring to is the one that contains an 18 step plan that he outlined when he was first given the role. Virgin Australia’s Board member David Baxby says that the plan he presented in March 2010 was as simple as it was bold. He says that Borghetti has not deviated from the script once.

You sense that when it comes to mind games, Borghetti may well be a natural. He has a great capacity to walk the talk, but must say the talk has a lovely dose of intrigue laced into it. When asked what’s next by the Financial Review, he responded, “..when Enzo Ferrari was asked which was his favourite car, he always responded ‘the next one’. If someone asks me which is the most exciting period, well, it’s the next one”.

One gets the feeling that Geoff Dixon and his mates are really going to be the least of Joyce’s concerns.