If you ever doubted the real value of a brand name and identity, try taking it away from your loyal customers and watch the reaction.

In the USA, ING Direct is no more – and Capital One is finding out the hard way that brand equity is real. Migrating customers to a new name and identity is not a simple task – especially when you try and force the wrong brand on them.

Too often, the value of a brand is underestimated in merger and acquisitions. Acquiring a customer base is easy (if you have the money), but keeping them is much harder.

Ownership and internal changes are difficult enough to manage but scrapping the very identity customers love and are familiar with, cuts to the core of the relationship they have and their reason to believe and stay loyal.

A year ago, Capital One acquired ING Direct USA for $9 billion. The agreement struck did not include rights to use ING Direct’s name or brand identity. The Capital One marketing team could not ‘save’ the ING brand. Within a year, Capital One had to phase our all the elements of the ING Direct identity including the name and the signature orange colour.

I’m sure the bean counters had a solid rationale for why it wasn’t worth acquiring the brand name and identity, but clearly spreadsheets did not account for the real value the brand contributes to the overall business.

With the difficult task of losing an iconic brand, the Capital One team also missed an opportunity to create a new a distinct brand to engage their new customers. Instead, they opted for a lazy but possibly very costly decision to simply align their new customers to their parent brand. Capital One has effectively created a family brand approach with ING Direct becoming Capital One 360 on the 1st February.

Capital One told twitter followers that they spent “a long time coming up with a new name and logo and we gave it a lot of thought. The name and logo symbolise that we’ve come full-circle, starting this journey with a new family, but still believing in the same things.”

However, just about everything that was familiar for ING customers is now gone. Worse still, Capital One 360 has also killed a quirky challenger brand and replaced it with another dated, bland and straight-laced bank identity – something that ING Direct always crusaded against.

Luke Landes at Forbes believes there is a real conflict between the two brands and the Capital One brand is a real negative for former ING customers. “The conflict and attitude arises from ING Direct’s history of being consumer friendly and on the forefront of internet technology (with a) strong and loyal following.”

“Their loyalty is being tested now as the bank’s acquirer, Capital One, has a more nuanced reputation,” Landes continued. “Capital One has been a brand associated mostly with credit cards, and for many years, customers have reported less than stellar experiences.”

The team at Capital One have been trying to communicate the name and logo change since November last year. ING Direct Head of Banking Jim Kelly and Capital One President Jon Witter told customers “Our name is changing to Capital One 360 and our colours are changing to red and blue, but our commitment to you is staying the same. We’ll have a new name and fresh look on the outside, but it’s the same ING Direct you’ve come to know and love.” 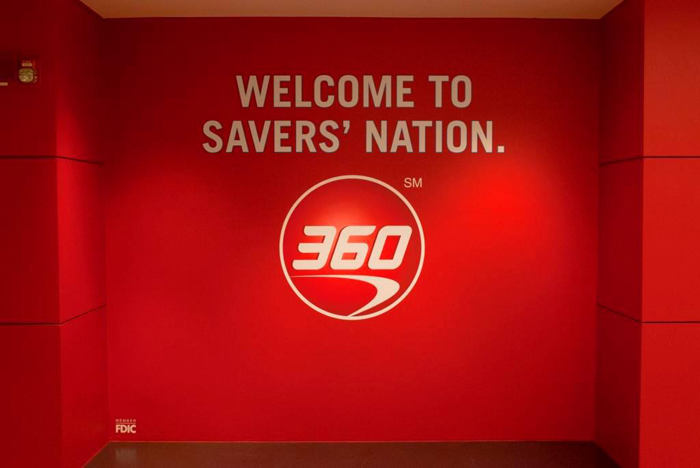 But customers don’t seem to buying the marketing spin.

Alex, a customer in Seattle commented, “ING had a reputation for quality, and Capital One has a reputation for screwing its customers. So yeah, it does seem pretty likely that ING quality will be declining as a result of this move.”

I could write paragraphs about how bad the new 360 brand identity is, and why it is wrong the audience, but on reading feedback from customers, I think they say it all.

Since the rebrand, Capital One 360’s social media sites have been buzzing with customer feedback and most it not pretty.

“Sad to see @INGDirect bite the dust. Remains to be seen if @CapitalOne360 will keep up the good work. Opening up @AllyBank just in case. James Walsh.”

“#INGDirect is now @CapitalOne360. I don’t know anyone who isn’t seriously depressed by this. Bad news, bad branding. Cathryn Stickel”

To be fair, Capital One has been tirelessly responding to the feedback and criticisms on social media. No doubt their call centre is also taking lots of calls as well.

The responses are sticking to the key messages. Whether it will appease customers, time will tell. Here are few examples:

“@MagnificentFemi We’re the same team as last week. Stick around, it’s going to be a fun ride with the same experience you’ve come to expect.”

“@MistressLaLa Hang around, Saver and give it time. You’ll see – online, mobile or by phone – your experience & service won’t go anywhere.”

“@jacindadavis Your money is no more uncool than it was last week. We’re making Capital One 360 a better way to bank – like we did before.”

The lesson in this is to carefully consider the value and equity of any brand in a merger or acquisition. Businesses can be bought but customers not so easily. Worse still, without the brand, what is the business really worth?