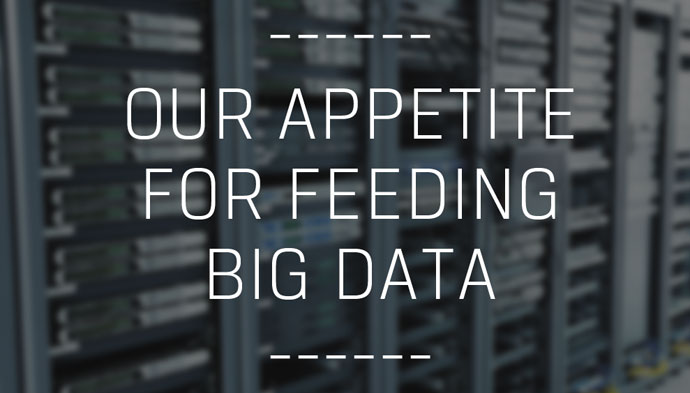 It’s game-on and most of us want to play.

Last month we wrote about Amazon’s recently launched online store which is solely dedicated to the Over 50 market.

Amazon offers us a glimpse into the future, where online retailers truly have an intimate understanding of a market – how they like to shop, what they like to buy, and what complimentary product purchases positively add to their lives. We observed that the ultimate endgame is for online retailers to leverage their ‘Big Data’ to literally create a ‘segment of one’. That is, totally personalized marketing.

However, let’s pause for a moment and reflect on the data inputs that make a ‘segment of one’ a possibility. The digital world has for a while been beating its chest over what it sees as the power of Big Data.  It has been suggested that ninety per cent of the data ever created has been generated in the past two years. Our digital interconnectedness and ever increasing propensity to declare to the world our every move, thought and purchase decision has produced an avalanche of data ripe for analysis.

The digital trail we all leave behind is the by-product of our time exploring life on Google, connecting with friends on Facebook, gifting Likes to brands, checking into bars and restaurants, credit card transactions, smart phone use, and much more, including devices with sensors that capture everything from our energy use to the roads on which we drive.

While the person sitting next to you in the café as you read this article may not be taking much notice of you, rest assured the aggregators of your digital life are taking plenty of notice. Big Data means big power and, for many companies, big dollars. What we all put into that mysterious Cloud is owned and leveraged by a small number of significant corporations, including Facebook, Amazon, Microsoft and Apple. Their shared focus is on monetizing the insights about us that their data provides.

What excites them most is the predictive potency of their sophisticated algorithms. With the right analysis it is suggested that our Big Data world can assign a 95% likelihood as to whether a certain person is likely to default on a loan or even survive a surgical operation. Microsoft’s research lab showed that they could predict a person’s approximate location up to 80 weeks into the future, at an accuracy of above 80 percent.

Big Data is powerful and can be helpful and timely. Andreas Weigend, the former chief scientist of Amazon.com, now directing Stanford University’s Social Data Lab, tells a story about awakening at dawn to catch a flight from Shanghai, when an app he’d begun using, Google Now, told him his flight was delayed.The software scours a person’s Gmail and calendar, as well as databases like maps and flight schedules. It had spotted the glitch in his travel plans and sent the warning/message? that he shouldn’t rush.

Osito, a small company in Palo Alto, offers similar advice with its smartphone predictive intelligence app. It offers you the information you need, right when you need it. This means calling up your boarding pass as you approach the airport, or alerting you to bad traffic on your normal commute 10 minutes before you leave your house. Location is the key to their approach, as it provides the necessary context to understand what information is relevant. If location is important then tracking your every move is critical.

Are we concerned about our privacy, or is a lack
of it simply the price we have to pay for a seemingly
more convenient and connected life?

However, we are sure you can see what is playing out here. Every smart app we use has the propensity to declare even more about us to the world. We simply add to the pool of data that is being captured about ourselves. The question is, do we care? Are we concerned about our privacy, or is a lack of it simply the price we have to pay for a seemingly more convenient and connected life?

We can feasibly draw some comfort from the fact that if data is shared from one company to another it will be encrypted in a way that the data remains anonymous. Data exchange will be occurring as we witness the creation of data markets where companies will buy, sell and trade data for mutual benefit. However with the right smarts our privacy may not always be assured. A recent study of 1.5 million anonymous cell phone users in Europe showed that just four points of additional reference were enough to individually identify 95 percent of the people. The concept of six degrees of separation takes on a whole new meaning.

While big data provides the opportunity for companies to profile each of us to the ‘nth’ degree, and tailor their offers with far more relevance, there is one profile we all should be interested in, and it reads like this;

‘Young (a remarkable proportion of the successful ones are in their late teens) … male (as few as 5% female) blessed with a phenomenal capacity for mental concentration, often over greatly protracted stretches of time. Many could be diagnosed, in social communication terms, as occupying a place somewhere on the autism spectrum.’

We are assuming you do not match the above profile, unless of course you are a ‘cyber thief’. The profile is the work of investigative journalist and historian Misha Glenny who wrote the book Dark Market: CyberThieves, CyberCops and You. His book seeks to examine who the human geeks are behind the dubious online personas, with usernames such as Lord Cyric, Dron or Matrix001. What emerges is a seedy picture of internet cafés, drug addiction and obsessive young geeks who are often seeking a world in which they get the respect that they find is lacking in the real world.

It is hard to knock any one striving for a little self-respect, except of course when it is gained by exploiting other people. It is estimated that around the globe there are over 1.5 million victims of cyber crime a day.  In February 2013 Australia ranked 10th in the world in terms of number of cyber attacks that occurred.

There is no doubt that our brave new digital world has some real advantages, but what we do not fully understand yet is what the trade-off is likely to be over time. It is simply game-on, and interestingly most of us want to play.