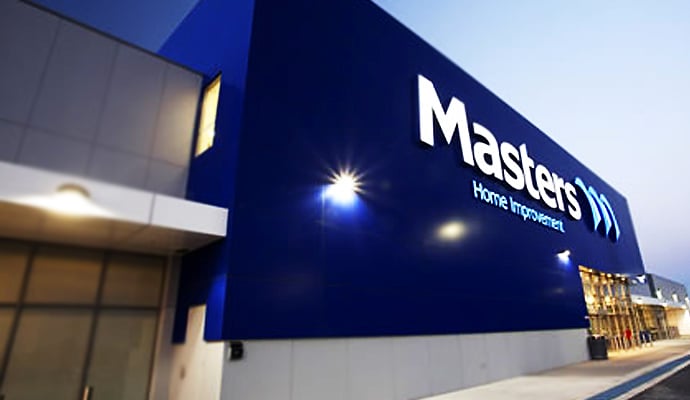 According to designer Hans Hulsbosch who created the brand for Woolworths’ hardware retail chain, Masters, the name was chosen because it stands for strength, intelligence and artistry. They wanted the name to be simple, strong and contemporary, one that would appeal to both genders. If that was the intent then something has been lost in the execution.

To date the Woolworths’ hardware division turned in sales of $1.24 billion, and an operating loss of $139 million, compared to an $81 million forecast loss. That is $58m more in losses than what was forecast, and what we don’t know is the associated opportunity cost by way of the distraction factor of senior management, away from Woolies other successful retail divisions.

Masters CEO Melinda Smith recently said the company had failed to grasp the seasonality of hardware and acknowledged she didn’t know a lot about the structure of the business when it began. She said the higher losses were due to overly optimistic sales budgets, relatively higher wage costs for new store openings and lower margins due to the sales mix. All this seems rather puzzling given its joint venture partner, US hardware giant Lowes, has been sitting at the table crafting the strategies.

Beyond the challenges of learning the dynamics of a new category what are the other lessons for other retail brands wishing to expand? Firstly, if you wish challenge a large established player with an absolute strangle hold on the category, then you need a compelling and differentiated proposition. In the case of Masters, it has simply not delivered on that relative to Bunnings. It has gone with a little more gloss and upmarket feel, but it is somewhat at odds with what the core target market expects. The appeal of the big box retailers has been both product choice and low prices. At the moment the slightly premium feel of Masters works against giving low price cues.

The second thing from a retail brand perspective, is that when you are a late entrant into a market you will always struggle somewhat with finding the right sites for stores. To this end Woolworths has at least put itself in the drivers seat by directly acquiring a lot of the real estate required.  However, if you do not have a differentiated offering, it will always be challenging if you choose to acquire sites serving the same catchment area as the established player, in this case Bunnings. I am not sure how many of the existing sites are going head-to-head, but it feels like there are quite a few. Not only are you asking that local market to shift loyalties, but you are also making it very easy to shop the category for the best price.

Finally, when you need scale, then the late entrant will be behind the eight ball for a long time. The established market leader has the benefit of seeing the challengers strategy playing out far in advance of it being on an effective model, and can work to simply tweak its already sophisticated operating systems.

Being the late entrant is fraught with difficulties. Woolworths has already witnessed how hard it has been in the liquor category with its own Dan Murphy’s seemingly in an uncatchable position relative to challenge First Choice. Once again First Choice has simply pursued a mimic the market leader strategy and it simply does not work.   More successful entrants into established categories in recent years in Australia has been German grocery retailer Aldi and wholesale warehouse club Costco. The reason being simply that they have pursued market relevant differentiated strategies, and avoided going head-to-head. If you do go head-to-head, then you need very deep pockets, something that Woolworths is going to be reminded of for quite sometime.

The Big Brand Idea Brand communications is a complex world. The role of the brand strategist and brand designer is to take the multitude of nuances of brand proposition,...

Brand mirror on the wall who is the Ugliest of them all?

Myer & David Jones Merger Should be Explored Last week we all found out that department store Myer invited its major rival David Jones on October 28, 2013 to...

Steve Jobs: a simple man who created a big brand

In truth, Steve Jobs was no simple man but he did embrace the concept of simplicity whole heartedly. There is no doubt a big part of the appeal of...

An Ice Cream Van for the Brand Experience Age Unilever have created an ice cream vending machine for the new age of brand experiences.

adidas Vs Nike – A Battle of Brand Association

All Brands Have Meaning Whether carefully and strategically considered or by default, all brands hold associated meanings in the minds of the market place. Well considered brands establish a...