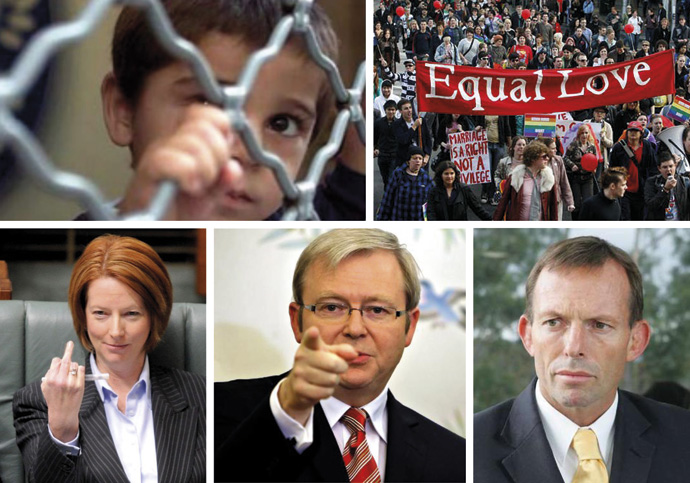 Australia’s international reputation has taken something of a beating in recent months. If we consider this reputation as our country’s brand, then we are ignoring the golden rule of branding: adhere to your values. Far from the fair, progressive and multicultural image that is at the core of our brand essence, the current international perception of our nation is at best, backward, and at worst, cruel.

Australia usually flies under the international media radar when it comes to politics, however, the farce that’s been playing out between and within our political parties is becoming a growing fascination overseas. The BBC describes Australian politics as ‘brutal’, while CNN dubs it a ‘soap opera’, both reporting stories on Gillard’s unusually high level of vilification and sexist bullying, as well as her tumultuous rise and fall and the ongoing childish bickering between both parties.

Sadly, the one thing that both major parties agree on is the government’s callous ’no chance’ position on refugees seeking asylum in Australia. While our national anthem (our country’s mission statement) declares “For those who’ve come across the seas, we’ve boundless plains to share,“ Kevin Rudd has made his position abundantly clear with his recent statement “From now on, any asylum-seeker who arrives in Australia by boat will have no chance of being settled in Australia as a refugee.” There is of course good reason to discourage desperate people from making the perilous journey to Australia by boat, but surely the answer is not to punish them by locking them up on a lonely, malaria-ridden island.

Known internationally as the lucky country (whose ‘land abounds in nature’s gifts’), Australia is also one of the most selfish, providing considerably less refuge to asylum seekers than many other developed countries. As a nation, we are largely uneducated on the facts about asylum seekers, and are therefore vulnerable to the government’s fear mongering on the threats they might present. Here are some facts, courtesy of Amnesty International:

While I’m up here on my soap box, I think it must be said that Australia has been embarrassingly slow on the uptake to legalise same-sex marriage. It will no doubt happen eventually, but rather than being world-leaders on the issue and strengthening our ‘progressive’ image, we are destined to be followers, only succumbing to international pressure with our tail between our legs.

I could go on about the multiple threats to our natural icons, such as dredging in the Great Barrier Reef, mining the Kimberley and felling the last of our old growth forests, but as this post is teetering on the edge of becoming a rant, I’ll reluctantly refrain. What I will say is that as an Australian who once took pride in what I believed to be our country’s values, I’m left embarrassed and ashamed of our current position. The degradation of the Australian brand ultimately weakens the personal brands of all its citizens.