.
Misunderstanding the visual language of political brands – How could they have got it so wrong?
The Victorian Liberal Party recently released a T-shirt designed for its members to wear on upcoming election day. The T-shirt features a blue fist holding a paint brush with the slogan; ‘paint the town blue’. It sounds like an appropriate piece of design, that is until you actually see it…
.
The hand holding the paintbrush is more of a fist, but not just any fist – a graphic, clenched fist in the style made famous throughout history by communists, socialists, and a whole host of far-left groups including the Black Panther Party, Hezbollah and the anti-capitalist Occupy movement.
.

.
The original design of the clenched fist traces back to 1917 when it was first created by the Industrial Workers of the World, a union organization founded by socialists. Throughout the 1940s and 50s it was adopted by communist parties all around the world. throughout the last sixty years it has been adopted by anti-war and feminist movements and was the basis for the famous ‘black power’ salute given by John Carlos and Tommie Smith at the 1968 Mexico City Olympics.
.
Currently the clenched fist is used as the symbol for the Progressive Labor Party in the United States, a political party whose website says it “fights to smash capitalism.”
.

Fair to say, the graphic, clenched fist emblazoned on the new Liberal party Tee is an piece of visual language with exceptionally rich and widely understood meaning. Ordinarily this might make for an excellent piece of brand communication – but not-so in this case. The problem with this T-shirt design is that the visual cues are wildly inappropriate. 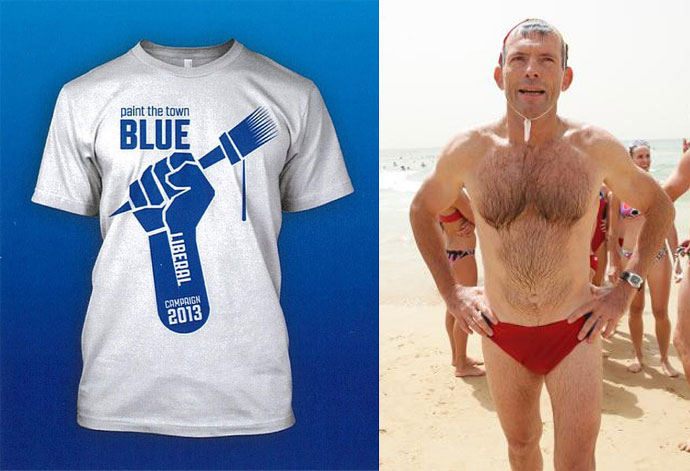 .
Whilst this design project should have, and historically would have been tasked to a professional who understood the language of visual design – it appears to have been handed to the ‘brother of a mate’ who might have a mac and an understanding of Adobe Illustrator, but clearly has no grasp of the visual language of politics. The result speaks for itself.
.

In all our years as a specialist brand design agency we have never seen an organisation of any type in any market be so radically miss-represented by the visual language of their brand communications. Victorian Liberal Party members must be mortified, and rightly so at the potential for humiliation these ill-considered T-shirts will attract – or perhaps there’s more to the colour of Tony Abbot’s (their National party leader) budgie smugglers than meets the eye.