Twenty years after merging, Llyods and TSB (Trustee Savings Bank) have parted ways as a result of the 2008 $20bn taxpayer bailout. The split was enforced by the EU to promote competition between the UK’s major financial institutions. The rebrands for Lloyds and TSB were both executed by London-based designer Rufus Leonard (conflict of interest, I hear you say?!) and are a contemporary refresh of their existing marks. While the brandmarks aren’t exactly groundbreaking, the narratives built into both marketing campaigns are quite compelling.

After the PR nightmare of the taxpayer-funded bailouts, it’s not surprising that both brands position themselves as being there for the little guy; a sentiment that is quite effectively communicated in both campaigns. Founded in 1810 by a Reverend, TSB has formed a narrative around its altruistic heritage as a local lender to the little guy. Lloyds meanwhile is taking the approach of being there “For the moments that matter”, such as buying your first home or starting a business. Both ads are worth a watch:

Unfortunately it looks like TSB ran out of budget by the time it got to the website. Merely weeks old, the site looks like it’s paying a visit straight from the 90’s. Occupying a small corner of the screen with clunky tab navigation and minimal brand messaging, it shares nothing of the strength and beauty of its print and TV ads. 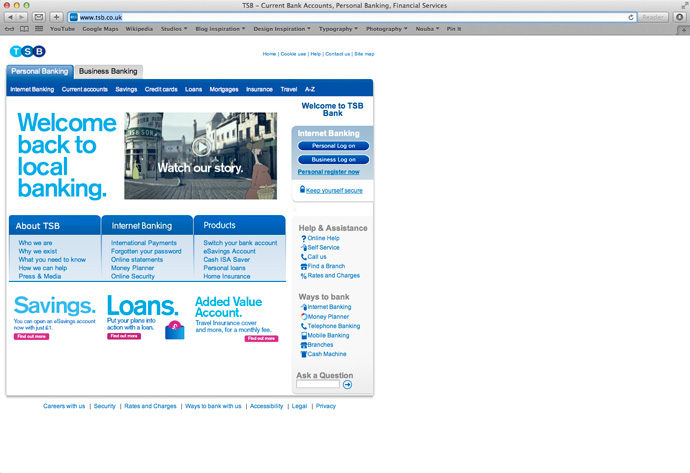 Former Fab exec, Bradford Shellhammer is back in the online retail business with recent launch of Bezar. Shellhammer says that he has learned the lessons of Fab and is...

A plug for the ADGA Mentoring Program

AGDA (Australian Graphic Design Association) is set to launch their 2017 Mentoring Program. The AGDA Mentoring Program is dedicated to bringing together experienced designers with those that are seeking...