A Brilliantly Designed Teaser Campaign
Around the country over the last few weeks we’ve been seeing alot of boobs. These cheeky billboards for Aussie underwear brand Bonds are a lovely and refreshing example of the almost lost art of the tease. There’s so much to love about this clever campaign…

The trend for brand communications over the last decade has been for faster, more immediate communication. As the speed consumer’s lives has continued to accelerate, brands have responded by creating campaigns that hit home in an instant. But mimicking consumer lifestyle is not always the best solution. As Bonds have reminded us, considering what consumers may need (like a pause from their daily madness to contemplate boobs) can be much more powerful than providing what they believe they want.

But this campaign is much more considered than just a cheeky word writ large around the cities of Australia.

Bonds are best known for manufacturing underpants (undies in the local vernacular). So broadening their brand proposition to include bras was always going to require a strategically strong communications campaign. The teaser component of this outdoor campaign has provided the key. Basing the campaign around the word ‘boobs’ is a masterstroke. I mean, how could you not love the word for a start, it’s friendly, cheeky, unoffensive, but even better contains a double ‘o’, so it even visually reflects it’s meaning. It also shares the same number of letters and the same first, second and last letters as the ‘Bonds’ brand. This enables the clever art direction of recasting the word ‘boobs’ to match the typography of the ‘Bonds’ brand mark design. From the moment they were unveiled, the link between Bonds and boobs was clear.

This week I began to notice some of the boobs billboards being replaced by… well, by boobs in bras billboards as the campaign evolved into a more conventional product oriented communication. And whilst the new billboards are nothing special, as the final, unveiled point in the campaign, they are the perfect finish to a great, memorable and I would predict, ultimately successful consumer campaign. 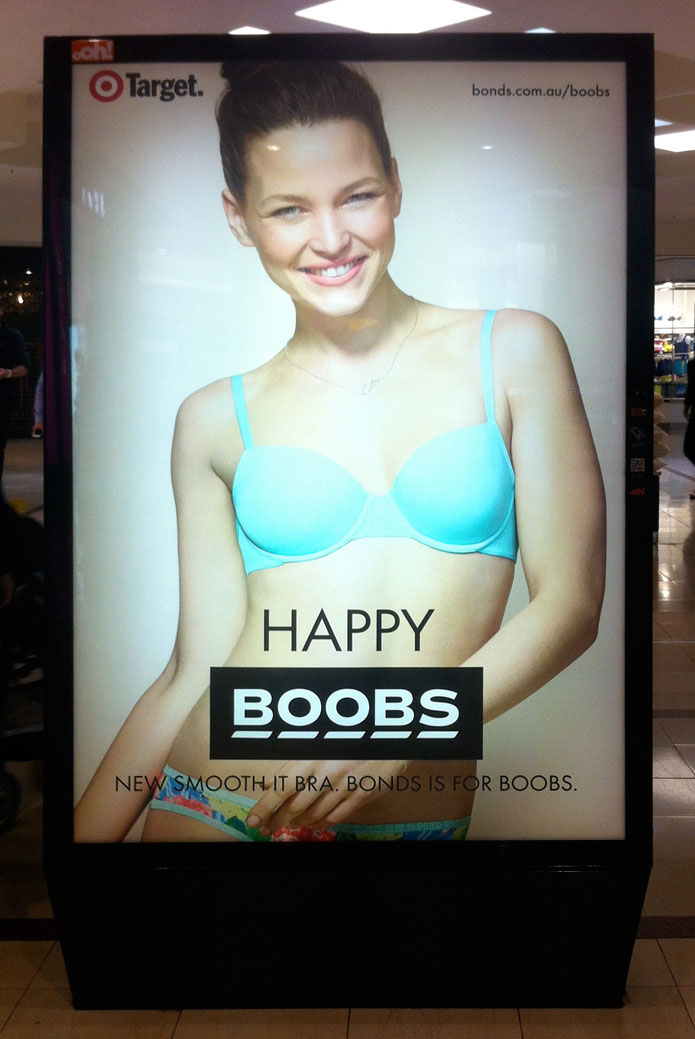