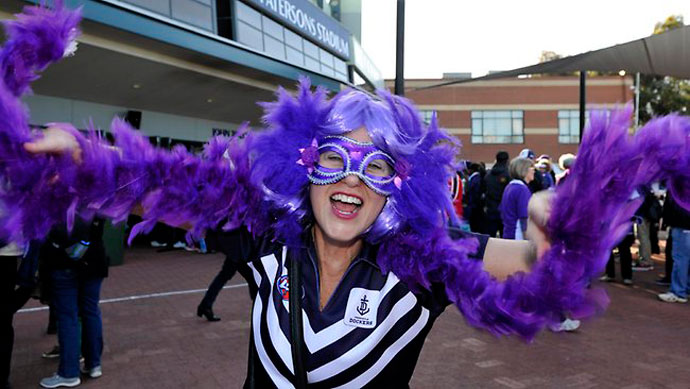 AFL Grand Final a good reminder of the power of the underdog in brand storytelling.
Last Saturday Melbourne hosted the 2013 Grand Final of Australian Rules Football with over 100,000 spectators cramming into the MCG to watch. The result, Hawthorn victors by 15 points, was exactly what I had been wishing for as a paid up and proud Hawthorn supporter. The game itself was not a great spectacle, rather a relentless grind to the final siren. Regardless, the result was Hawthorn’s 11th premiership in 111 years (note the interesting symmetry in the those numbers) and cause for celebration.

However, it was the lead up to the match that provided some interesting reminders in brand storytelling. The team Hawthorn was matched against was Fremantle (the Dockers), who hail from the far the West of the country. What was interesting, but hardly surprising, was that just about every football supporter you spoke to who were not Hawthorn followers were going to barrack for Fremantle. It was simply the underdog phenomena playing out. Fremantle, with its distinctive purple colours, had been in the Australian Football League for 19 years and had never made it to the Grand Final. They were the underdog.

A number of Harvard University academics conducted research into the ‘underdog effect’ following the win of Barack Obama in the 2008 US presidential elections. They identified a number of areas where underdog status was a real plus for brands. Particularly if there is an authentic narrative around humble beginnings, lack of resources, uneven playing field, etc all overcome with exceptional passion and determination. It works because many people consider themselves to be underdogs (even though their peers do not), and can be especially strong when consumers are purchasing for themselves. It also works because we live in an underdog culture, e.g., “The Australian dream to own your home”, along with tall  “poppy syndrome” that has so many Australians keen to pull down seemingly over achievers (yes, even the Hawthorn Football Club). It is this latter point that successful brands should keep top of mind as they pursue enduring leadership as there is value in regularly reminding us of their humble beginnings and passion.

While there is potency to the underdog status in brand storytelling for many brands, but it is not for everyone. High end luxury brands do not require underdog status, rather exclusivity and the wonder of being rare and scarce. Likewise if you have legitimate underdog status it does not mean that you will naturally be a winner, regardless of your passion and determination. Just ask the lads from Fremantle. Go Hawks!