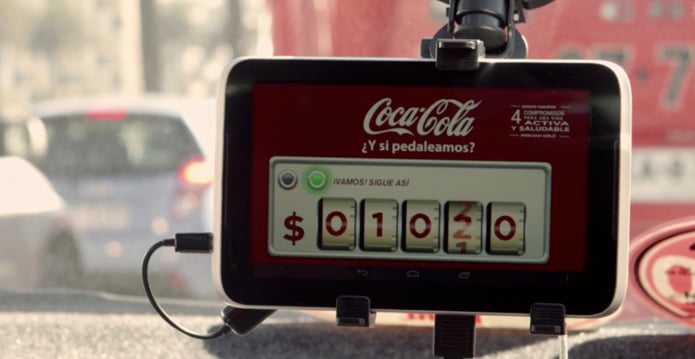 Coca Cola in Chile is promoting active lifestyles by asking taxi passengers to pedal for a discount.

As part of their international “Happiness is Movement” campaign, Coca Cola (aided by the creatives at McCann) have come up with an engaging way to get people moving. A Santiago taxi has been fitted out with a pedaling system in the back seat, which is connected to a meter to measure your discount as you pedal. The more you pedal, the better your discount.

This endearing gimmick is one of many clever attempts by Coke to paint itself as a champion of healthy living (see the Happiness is Movement ad here). The timing of the campaign happens to coincide with some particularly bad press relating to sugar and soft drinks in particular. It’s no secret that soft drinks such as coke are a weighty factor in issues like obesity, diabetes and stroke; so is it really appropriate for Coca Cola to position themselves as pro-health? Whilst it could be argued that any effort to start a conversation about these global health issues is a positive thing, my inner cynic is struggling to see the altruism. I’m more inclined to see this as smokescreen to distract customers from harmful ingredients and related health problems.

I wonder if the Coca Cola taxi driver offers passengers a nice cold coke after they’ve worked up a sweat? With a mammoth 35g of sugar per can, passengers would have to do an awful lot of pedalling to burn it off.