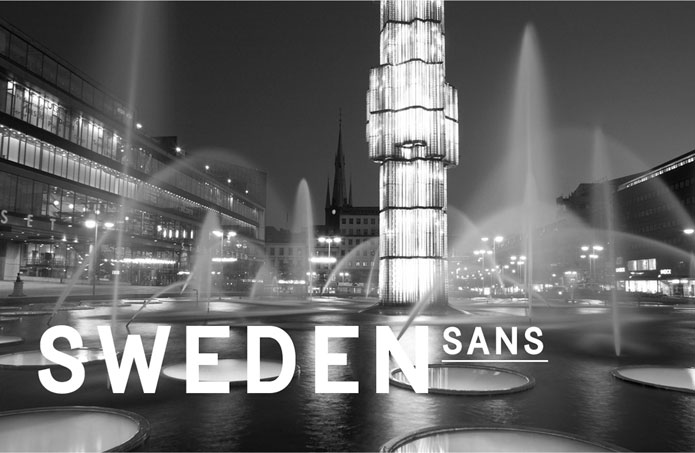 Last week the government of Sweden unveiled a new brand identity for the country to combine the Swedish ministries, agencies, and businesses under a single unified look. As you can imagine, the re-branding of a country is not an everyday occurrence and represents possibly the greatest challenge to brand designers. 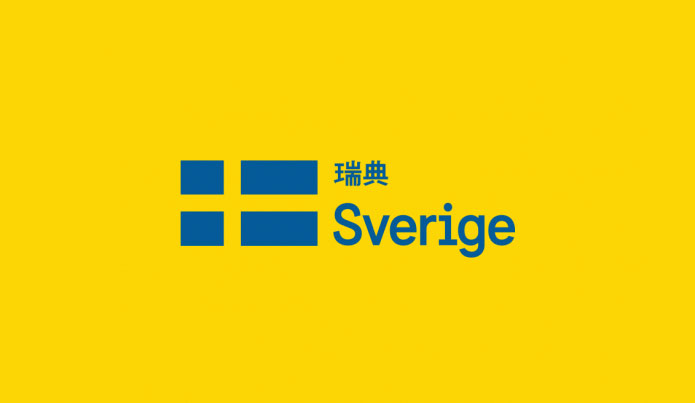 Whilst at first glance the new Swedish brand identity design appears an obvious and simplistic solution, the all-but impossible task of capturing the essence and spirit of a country, its history and its people in a single brand mark demands a solutions that is more about an immediately recognizable anchor for a palette of secondary visual language than it is about a brand mark that communicates all things to all people. From that perspective the design solution stands-out as a style-driven, bold and strong foundation on which to build a multifaceted identity system that Nation Branding demands.

Stockholm-based creative agency Söderhavet designed the new brand identity. The project was commissioned by the Council for the Promotion of Sweden (‘Nämnden för Sverigefrämjande i Utlandet’, NSU), which includes five government agencies: the Ministry of Foreign Affairs, Visit Sweden, the Ministry for Enterprise, Energy and Communications, Business Sweden, and the Swedish Institute. Much more often that not it is this complexity of stakeholders that proves the greatest challenge for any major place branding project. The quality of the outcome for this project is either testament to a well structured steering committee on client side, a hugely firm and persuasive project director from agency side, or both. 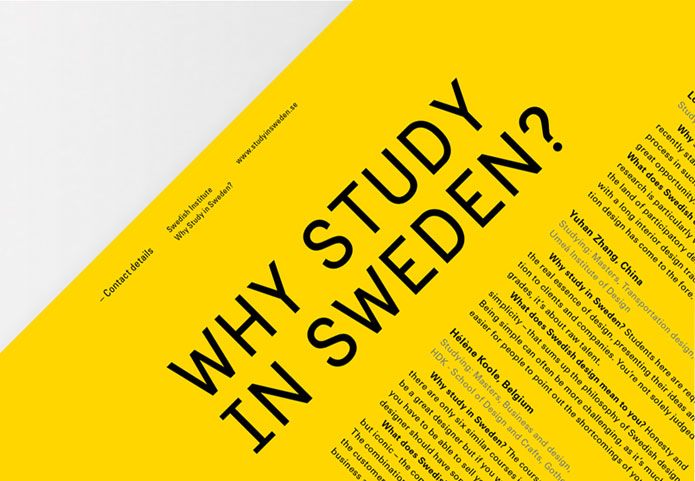 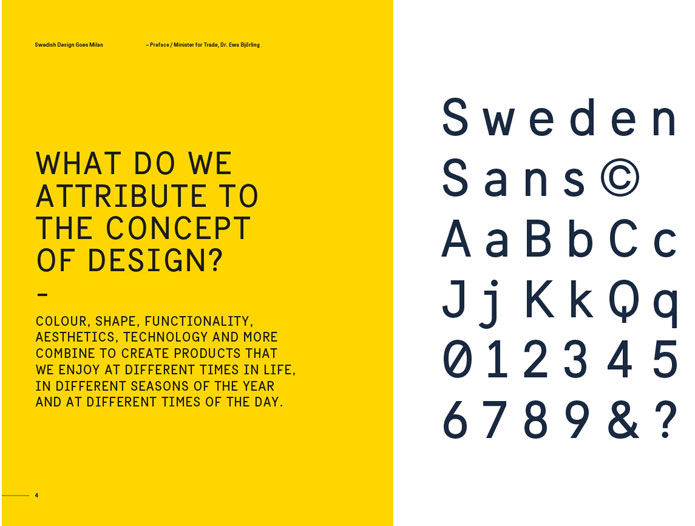 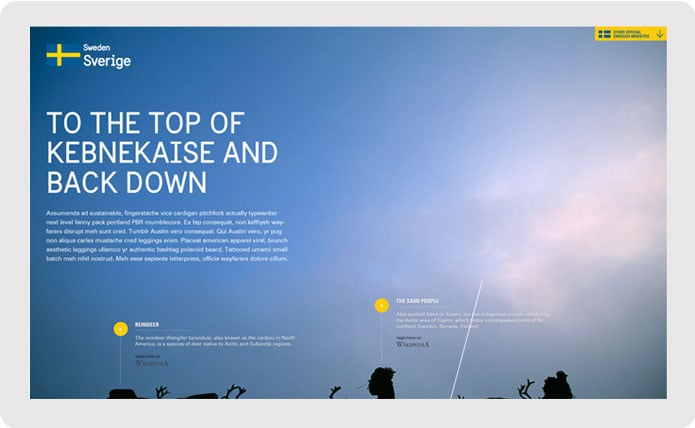 As Söderhavet outline on their site:

The Brief – Sweden’s government asked us to develop a new identity for the country, to be used when communicating on behalf of Sweden. Our brief was to replace the many fragmented organizational identities of Swedish ministries, agencies and corporations with one integrated visual brand identity system, to unambiguously represent Sweden in the world.

The Process
The new identity was commissioned by the Council for the Promotion of Sweden (‘Nämnden för Sverigefrämjande i Utlandet’, NSU), made up of five government agencies with a mandate to promote Sweden abroad — the Ministry of Foreign Affairs; Visit Sweden; the Ministry for Enterprise, Energy and Communications; Business Sweden; and the Swedish Institute.

Although these organizations work together to promote Sweden, they have until now used their own identities when communicating abroad, which sometimes leads to a fragmented impression of who speaks for Sweden. The new global brand identity solves this problem. “Sweden’s nation-branding work has long been based on a common communications platform,” says Frida Roberts, head of digital communications at the Swedish Institute. “What we lacked was a common visual identity to properly anchor it.” Söderhavet was chosen for the project after a public procurement process that included a final judging round of five anonymized pitches by some of Sweden’s leading design agencies.

During the design process, we grappled with many questions, including: Which symbols best represent a country? How do we design a unified identity for use in extremely divergent contexts and on wildly different scales? Which parts of an identity should always be used, and which parts only in the right context? And how do we clarify when an organization is speaking on behalf of Sweden?

The Solution – We developed a hierarchy of identity carriers. We placed two obligatory elements at the apex: The Swedish flag, in the exact proportions and colors used since the 17th century, and the textual mark ‘Sverige’, accompanied by a local translation for the country’s name.   On the second rung we placed those elements which should be used if the medium allows it: A specially commissioned font face, Sweden Sans, to further differentiate the textual marks, and two principal colors — the gold and blue found on Sweden’s flag.

The Flag
The new identity reinstates the Swedish flag as the country’s primary identity bearer, reflecting the flag’s enduring status as Sweden’s most recognized symbol internationally. “We tried every possible permutation of every possible symbol, from crowns to crosses to abstract shapes, but we always came back to the flag,” says Mattias Svensson, Creative Director at Söderhavet. “It’s audacious to choose such an obvious symbol as the foundation for an identity, but I’m proud we did so — the flag will be just as relevant 20 years from now as it is today. ”

The Brand Language
The Swedish word for Sweden, ‘Sverige’, becomes the country’s primary textual mark, accompanied by a local translation of the name. In this way, an emphasis on Sweden’s distinct linguistic heritage is balanced by the country’s well-known tradition of openness to the world and respect for other cultures. “We chose not to use ‘Sweden’ as our textual mark,” says Joakim Norén, Brand Director at the Swedish Institute, a government agency. “Every time we use ‘Sverige’ we have an opportunity to tell the world something about ourselves. And by also using the local name for Sweden, we can connect more deeply via a person’s mother tongue, rather than through their second or third language.”

The Custom Sweden Sans typeface
A third major identity element helps to further differentiate the textual mark — a specially developed typeface, ‘Sweden Sans’, to be used exclusively in the context of Sweden’s identity. “We began by searching for fonts with clean Scandinavian lines, but when we saw the licensing costs for an assignment of this size, we realized it would be cheaper and more fun to develop our own,” says Jesper Robinell, Design Director at Söderhavet. “So we partnered with Sweden’s best-known font designer, Stefan Hattenbach, to design Sweden Sans.”

“We’ve given Sweden some great long-term identity building tools,” says Söderhavet’s Mattias. “In the meantime, this assignment has taught us much about place- and nation branding, and it has really whetted our appetite for more such projects in the future.”

Roll-out
Sweden’s new identity system is now being rolled out in all channels. The most high-profile uses to date are the redesigns of Sweden.se and work.Sweden.se.

Söderhavet is a Stockholm-based strategic design agency with expertise in building global brand identities for major multinational organizations. This year, Söderhavet was again voted Digital Agency of the Year in a major survey of Swedish clients, and is the only digital agency ranked in the top three for four years running.