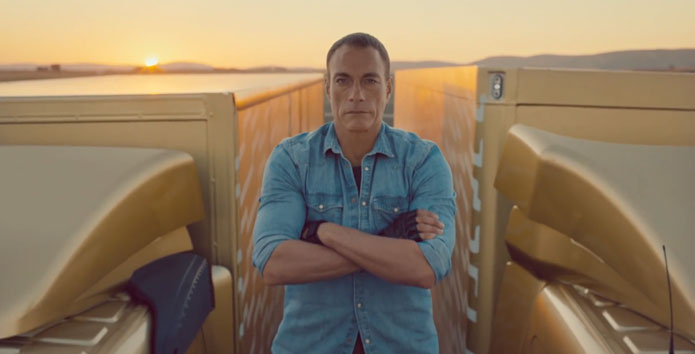 Volvo & Van Damme – A Video Made in Viral Heaven
Volvo recently released a new ad featuring actor & martial arts legend Van Damme. The idea behind the ad, which has gone truly viral on Youtube, is to use Van Damme and his awe inspiring physical flexibility to demonstrate the world first Volvo Dynamic Steering technology used in the latest range of Volvo trucks.

It is not by accident that the ad, which has had a lazy 42 million YouTube views to-date, has gone viral. From its inception this was clearly a play to develop the type of content that would press the buttons required to cause some mass momentum. And as Mediapost.com advertising columnist Barbara Lippert points out; “the publicity will not only aid the overarching Volvo brand, but it could also sell more trucks.”

Volvo spokesman Anders Vilhelmsson sums-it-up; “This is completely unique. It’s an incredible human way to show the equilibrium of the steering of the truck,” she says, adding that “anyone who knows anyone who drives a truck or owns a truck will mention it to them. People love this stuff. Reaching those current truck drivers and owners was a big part of the marketing strategy. In using social media rather than a traditional TV ad, Volvo also hoped to boost brand awareness with young people who could be “future truck drivers”.

This live test was filmed in Spain on a closed-off landing field at sunrise in one take.
Directed by Andreas Nilsson
Soundtrack by Enya: ‘Only Time’See the Teaser with Jean-Claude Van Damme and the technician behind the new steering. In some ways it is a more charming, softer-sell version of the final product:
http://youtu.be/Yatg89gi0nM