Like with any holiday, Australia Day it is often abused by advertisers desperately trying to get our attention. While some ads stand out, many are probably not worth the investment. Then there are the ones that get it so wrong it can be potentially damaging for the brand.

Here’s a look at how brands are leveraging Aussie brand patriotism for 2014.

I always admire brands that understand and embrace their audience. This year, McDonalds will no doubt delight many fans as they rename some of their restaurants by their colloquial Aussie name, ‘Maccas’.

Love or hate the brand, this is a smart move that will surely appeal to Mac-ambassadors. They are also running their annual campaign to promote the MacOz. This time, the call to action is, “eat it with passion, wear it with pride”.

Getting the taste for an Aussie Gaytime

From a more innocent era when having a gaytime meant something quite different, this classic Aussie brand has the license to be a little cheeky and we love it! So summer, so Australian and so classically inappropriate. What’s not to like about this?

The brand has been also having fun with their retro image to provide some classic gaytime brand gestures. Remember, “It’s hard to have a Gaytime on your own!”

Jeep reminds us of their classic grill with an obvious Aussie brand connection to the BBQ. Simple and effective use of an Aussie cliché, executed reasonably well.

While I don’t think it will make people race out and buy a Jeep, it does tap into a brand passion that they have been fuelling. It’s a fairly safe Aussie brand link, except for maybe those who are vegan or vegetarians but I’m guessing their research tells them this isn’t a concern.

With another big budget meaty campaign, Sam Kekovich is back for his 10th year as Lambassador. But this year it is Sam who needs to be given the chop.

Once clever, this year’s effort is no even mildly amusing, it’s painful to watch (and unnecessarily insulting to some).

Everyone deserves a day off

I’m not a vegetarian but I have to admit that this did cut through. With meat and BBQs synonymous with Australia Day, Animals Australia are swimming against the tide on this one. However, this is a well-crafted campaign that hits hard at the Lambassadors and MacOzzies and asks us to rethink what Australia Day should be about. The message of ‘everyone deserves a day off, including our animals’ is a powerful one. And of course, there is a nice little dig at the Kiwis.

It’s not always the size of the budget that makes the difference. This is definitely one for social sharing.

IGA encourages us to ‘Say G’day’

In an effort to differentiate from the big two, IGA is playing on the biggest Aussie cliche of all. The campaign encourages Aussies to go into their local IGA store and ‘Say G’day’.

The campaign is supported by a re-recorded version of the Slim Dusty song ‘Say G’day’. The brand gesture is the ability to download this for free from their website. Cheesy but it also aligns nicely to their ‘how the locals like it’ brand messaging.

Rover – Sounds of Australia Day or a Harley?

We highlighted this last week and still can’t believe they’ve done it (click here for full post and Harley ad).

Rover’s rip off of a Harley Davidson’s Christmas promo could’ve been a great idea – if only it was original.

This year’s biggest Aussie Day fail has to go to Aldi. Earlier this month they had the politically correct chatters screaming with their release of their insensitive Aussie Day t-shirts. Worse still, the Australian government appeared to have endorsed the t-shirts or at least the use of the Australia brand.

In a PR disaster, Aldi had to withdraw the offending t-shirts and apologise. Some potential brand damage here but I suspect most of the loyal Aldi shoppers are wondering what all the fuss is about. 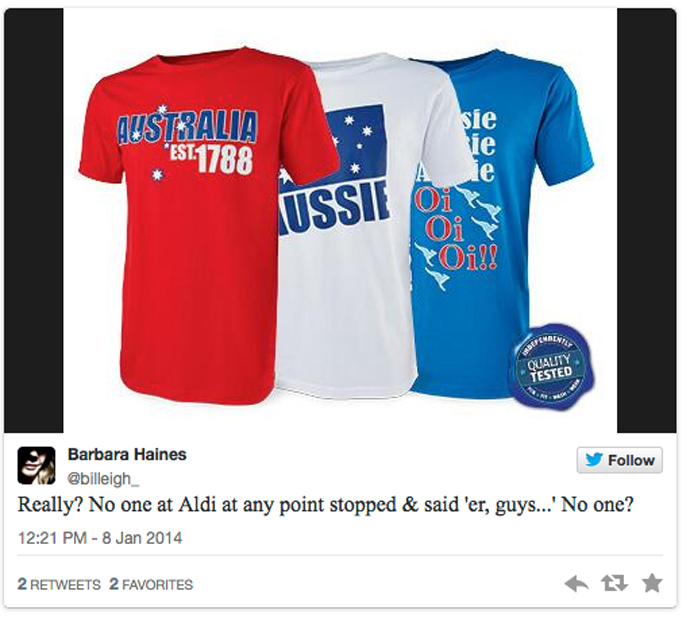 Did any other ads catch your eye this Australia Day? Add a comment and we’ll update the blog.