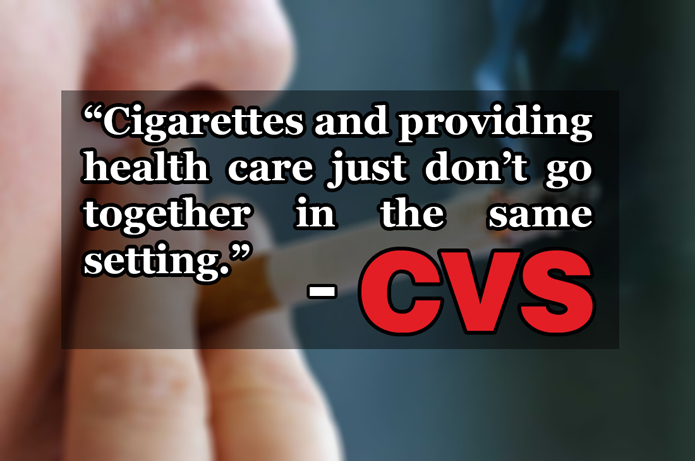 For some time now, CVS has been promoting itself as a healthcare provider: in store, visitors are able to speak to pharmacists and nurses, offering walk-in clinics and managed health plans. It seemed a weird paradox to sell both health services and tobacco products under the one roof, and that started to resonate. “One of the first questions they ask us is, ‘Well, if you’re going to be part of the health care system, how can you continue to sell tobacco products?'” CVS Chief Medical Officer Dr. Troyen A. Brennan said. “There’s really no good answer to that at all.”

So in a bold move by CVS, they are phasing out tobacco products in all stores, effective October 1. Not surprisingly (but rather saddening), CVS shares fell 1 percent. Larger rival Walgreen Co, which will keep selling cigarettes, rose 3.9 percent, while No. 3 Rite Aid Corp, which also will still offer cigarettes, rose 2 percent.

However, the short term hit to CVS will, I think, result in massive long-term gains. Aside from the positive publicity they are receiving — from anti-smoking groups to President Obama — they will recoup revenue from a number of sources. The number of Americans who smoke has dropped to 18% (from 43% in 1965). The stigma associated with smoking is increasing everyday and CVS has made a large, bold gesture to be at the forefront of that movement. Of all the major drugstore chains, CVS will now take major share of consumer’s minds for all things healthcare related, especially for those looking to quit smoking. Government regulations may eventually be imposed to remove tobacco from all drugstores both around American and the rest of the world, but CVS has preempted this possibility, which should work to their favour in the long run.

Stomaching a loss of $2Bn is no small task. Shareholders have acted as one would expect, but kudos should go to the decision makers at CVS. They’ve put a bold foot forward and lifted their brand in the minds of the American public.

What’s in a Brand Name? The right brand name is timeless, is easy to say and remember, stands for something, and facilitates brand extensions. Its sound has rhythm. It...

Undefeated after 21 races in Australia was justification enough to book a first class ticket in June and head to England to take on the best of what Europe...

Congratulations to everyone who entered the IGNITE! Design Graduate awards. We are again throughly impressed by the depth of talent from Australian Design Graduates. Unfortunately, last year’s competition was...