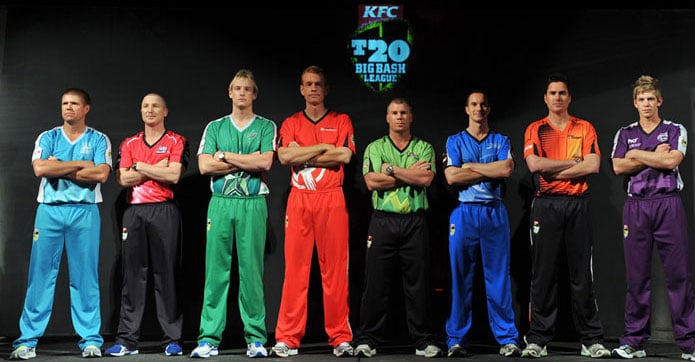 Our March Article for The Melbourne Review: Cricket Australia and its innovative play.

In May 2010 we were asked to attend a meeting with Cricket Australia, sign a confidentiality agreement, and then be briefed on a most audacious plan to launch a new version of T20 cricket in a little over six months.

We were invited to pitch to provide the creative services required to develop the new franchise brands for the eight teams of the new Big Bash League (BBL) competition.

The sad thing in this little tale is that our role in the process, was short lived. We pitched and we ditched. The task was given to Cricket Australia’s incumbent agency Future Brand. We retreated graciously, but disappointed.

Armchair viewers have also been big. A move to Channel 10, after being on Fox Sports for the first two years, has seen a four-fold increase in viewers with a cumulative audience of just under 10 million Australians, at an average of 932,000 metro and regional viewers.

However, the success of BBL was only possible because Cricket Australia was bold and smart enough to recognise that they needed to introduce something more captivating into their sport. In 2010 Market research of children under 15 years was showing that cricket was ranked the seventh favourite sport for boys, and not on the radar at all for girls. Different interests, increasing cultural diversity, and a new digital world, where screen based activities were screaming for attention, meant cricket was becoming less relevant.

When I recently followed up Mike McKenna, Executive General Manager, Operations at Cricket Australia and head of BBL, to get his perspective on the journey he had been on with BBL, his response was rather more humble. He simply saw the exercise as a great case study in Marketing 101.

The market place for sport, and therefore cricket, was changing, and they had to embark on new product development or suffer a loss in market share. Brilliantly understated, and very much in line with the persona of Mike McKenna, who appears more like a conservative accountant than the astute marketer with some undeniable flair that he is.

What McKenna and his team have done is to create a game nothing like the cricket I grew up on. They knew exactly who they were targeting, and were unapologetic in designing it to appeal first and foremost to kids and their families. It is the ultimate in market segmentation: different strokes for different folks.

The cricket purist could still pursue their passion with Test and ODI formats, but a new generation was going to be engaged and entertained. Hence along with the short form, more intense cricket of BBL, came the music, fireworks, dancers and acrobats. But before the dancers and big hitters, a major change program had to be put into play. The new competition had to supersede a state-based format. It required six state-based organisations steeped in parochial and heritage baggage, giving up turf. At the same the development of eight new city-based teams (two each in Melbourne and Sydney), rules around player recruitment, new team names, new team colours and uniforms, new ownership structures, new competition rules.

The brief in a branding sense was to create distinctive DNA for each team, around names that conveyed a sense of energy, and had an urban edge. Names derived from animal species were out and names such as Renegades in. But what is interesting is the influence that climatic conditions had in the team naming, with names such as Hurricanes, Thunder, Heat and Scorchers. Perhaps it is Cricket Australia’s way of subtly reminding us of the perils of climate change.

Regardless, of whatever the teams were called, the mindset was always one of orchestrating immediate team rivalry, and a sense of tribal loyalty amongst young supporters. To have young cricket followers adopt and follow a team with a true competitive passion. The city-based structure facilitated an immediate rivalry, and interestingly, Melbourne and Sydney with two teams, has been less able to harness the same level of intense team support as the other teams.

To illustrate the magnitude of what cricket has achieved, consider applying a similar scenario to Aussie Rules. Imagine the AFL reducing the current season to 16 rounds and a final series. Allowing a short break for players and then starting a new competition, with newly named teams being formed from the total pool of players.

Rules for the new format game that are designed to highlight the absolute best of Aussie Rules would have to be developed. New rules that demand big pack marks and penalise uncontested marks. Rules that disproportionately reward players who are able to evade the opposition, who carry bouncing the ball for more than 75 metres. Awarding twelve points for goals kicked using a torpedo punt or drop kick.

Can you imagine the AFL creating a new format game that operated outside the current club structure, but was capable of working along side the current competition? It would never happen. The magnitude of change required would need a paradigm shift way beyond what clubs and the AFL could ever muster. The AFL already finds it impossible to run a state of origin competition alongside the normal season.

The above is not a criticism of the AFL, simply an analogy that serves to highlight something of the magnitude of what Cricket Australia has achieved. The Big Bash League is not everyone’s cup of tea, it is not meant to be. But it does appear to be hitting a six with kids and their families, and that is precisely what it was born to do.