The new Sydney lockouts have been widely reported across the media as a way to curb alcohol and drug related violence. The idea is not new — Melbourne attempted to implement it in 2008, and it was reversed after only three months. The first wave of reports is showing signs that behaviour patterns are not changing, just the timing of incidences. So there is a deeper issue to address; one that can be better communicated as a means of education than simply shutting doors. Just like the 2010 road safety campaign, Kings Cross club owner John Ibrahim has enlisted the help of friends to tell the youth of today: don’t be a dickhead.

The ‘help’ are: member of the Australian Bra Boys surf gang, Koby Abberton and radio personality and repeat foot-in-mouth offender, Kyle Sandliands. The irony of these three telling people not to be a dickhead is absolutely delicious, the delivery of the video is woeful, but the message behind it is actually relevant (and if Kyle Sandilands told me not to be a dickhead, I’d probably reevaluate my entire life).

From a communications perspective, I can get on board with the campaign hashtag, #dontbeadickhead. I find most campaign hashtags poorly used or all together superfluous, but this one resonates. I can envision it becoming a “name and shame” activity where society comments on its own members and illustrates our dickheads. This public self-policing would be a valid use of shared media to try and spread the message that acting like a dickhead doesn’t make you cool.

If I were living in Sydney, these lockouts would affect me. My weekend bedtime often goes beyond 3am, and while I witness occasional fights and arguments, the relative masses are all well behaved and out to enjoy themselves. The unfortunate reality is that a minor percentage of society gets the most commentary and perhaps it’s that publicity that spawns more similar acts. I believe the media to be hugely accountable for this. Trend lines seem to show that violence overall is actually decreasing, but reporting it is increasing, so the opportunity to get your 15 minutes of fame now has a new avenue.

There’s also something inherent in Australian culture that makes us more predisposed to violent acts, especially during a night out drinking — but I have no explanation for this outside of societal acceptance. European drinking culture is much more rife but in my experience, there is very little in the way of brawls or pub fights. 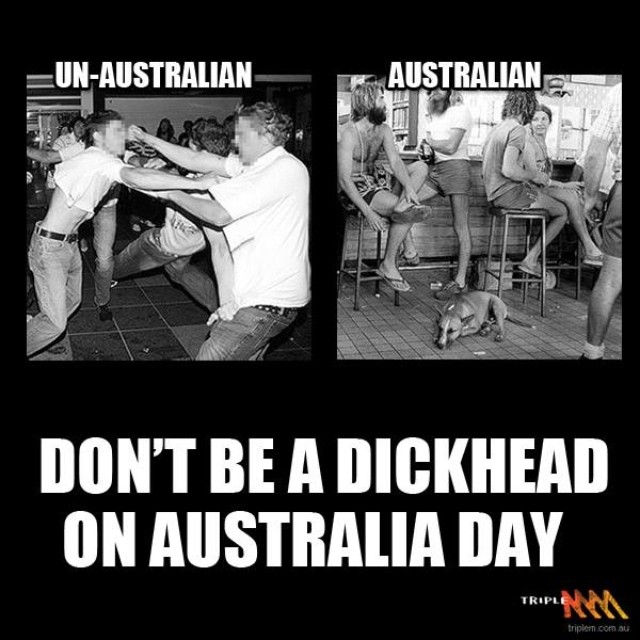 So perhaps these three are onto something. It’s not uncommon for Australians to point out our own shortcomings. It’s not the first time we’ve been told to pull our heads in. #dontbeadickhead has a similar feel to it than the popular and successful, “drink then drive you’re a bloody idiot” campaign, but the media platforms now available could make this a much more socially-driven, grassroots style of campaign. Australians calling out Australians.

dontbeadickhead.com.au is available for sale. Who’s up for the share and shame?