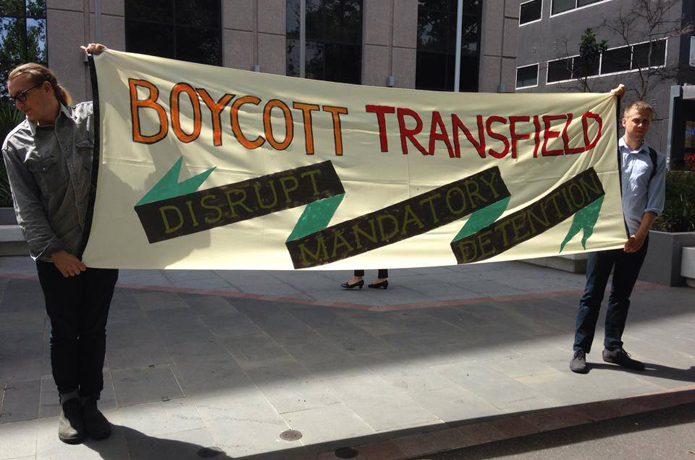 The Biennale of Sydney ends 40 year relationship with Transfield.

Several weeks ago, a friend came to me with a dilemma. As a contributing artist to the Biennale of Sydney, she was devastated to learn that the event’s founding sponsor, Transfield Holdings, was profiting from the government’s mandatory detention policy by providing services to camps at Nauru and Manus.

As a passionate supporter of human rights, my friend, together with 4 other Biennale artists, made the courageous decision to withdraw from Australia’s biggest visual arts event. In their letter of withdrawal, the artists urged the Biennale to act “ethically and transparently” and to “send a message to Transfield that we will not add value to their brand and its inhumane enterprise.”

Since then, pressure has been mounting on the Biennale with many more artists and patrons opposing its association with Transfield. In a historic win for people power, director of Transfield Holdings, Luca Belgiorno-Nettis, resigned as chair of the board of the Sydney Biennale and the event simultaneously dropped its $600,000 sponsorship.

The unprecedented move has blown the issue of philanthropic whitewashing wide open. While many corporations make positive and ethical contributions to the arts, there are those who seek to launder their brand image through sponsorship and charitable donations. Traditionally, sponsorship is accepted without too many questions, but after the success of the Biennale boycott, we may hope to see organisations taking greater care to align benefactors with their own brand values.

Presumably threatened by a potential move toward sponsorship transparency, arts minister, George Brandis has talked of his plans to interfere with the Australia Council by forcing them to cut arts funding to organisations that refuse corporate sponsorship on ethical grounds. Seemingly more concerned about the fragile egos of corporations than the freedom of public opinion, Brandis states “the decision (to drop sponsorship) sends precisely the wrong message to other actual or potential corporate sponsors of the arts: that they may be insulted, and possibly suffer reputational damage, if an arts company or festival decides to make a political statement about an aspect of their commercial relationships with government…”

I would argue that it’s entirely appropriate for artists to question the origin of their corporate sponsorship. While government funding serves its own values (economic and cultural) sponsorship exists as a private partnership with its own ends for each party. If artists can’t voice and act upon ethical concerns regarding sponsorship, who will? Clearly government has corporations’ best interests at heart.

What do you think? Should arts organisations be penalised for rejecting sponsorship from corporations that conflict with their own brand values?