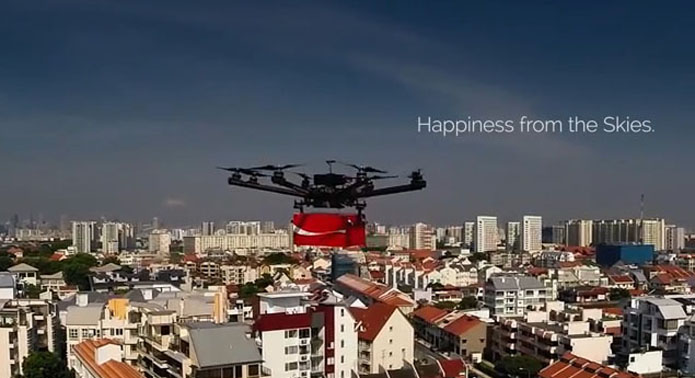 As part of Coca Cola’s kindness movement and international campaign called “Where Will Happiness Strike Next?” Coke sends free Coke cans and messages of support to Singapore’s migrant workforce via drones in connection with the non-profit organisation Singapore Kindness Movement.

Drones dropped off boxes of Coke cans and more than 2,700 photos of Singaporeans with handwritten signs thanking the workers for building their city. The drones flew high through construction sites to reach unsuspecting workers.

“By using technology in an innovative way, as a service to happiness, we were able to bring together two segments of the community who rarely interact,” said Leonardo O’Grady, ASEAN director of integrated marketing communications, Coca-Cola. “We also worked alongside the Singapore Kindness Movement, and fulfilled a shared vision of providing the local man-on-the-street with an opportunity to show their appreciation for these guest workers work so hard and far away from home to contribute to the success of Singapore.”

The project sought to build much needed bridges between Singaporeans and the city-state’s 1.3 million-strong guest worker population that comprises about one third of the country’s entire workforce. The largest group of foreign labourers is made up of guest workers that come from as far away as India, China, Bangladesh and Myanmar. These workers are often isolated from Singaporeans as they live in housing with other migrant workers. They also spend long periods of time without seeing their families and friends.

Eugene Cheong, Chief Creative Officer of Ogilvy & Mather Asia Pacific said, “this project is exciting because it touches on a universal social tension in modern society — the disconnect between guest workers and the local residents of the places that have become their home away from home. Construction workers, in particular, tend to be ‘invisible’ as they are working in areas that are not accessible to the average person. So in order to appreciate them, we first need to see them. This is what this video allows us to do.”

There are obvious kick-backs for Coca-Cola but for me this is an extraordinary brand gesture which brings human emotion to the forefront. Having lived in Singapore and experienced this tension first hand I can appreciate how the workers must have felt receiving personal messages from Singaporeans — an emotional response which is captured in the video.

In their latest efforts to spread happiness Coca-Cola has been extending this campaign to the World Cup in Brazil.