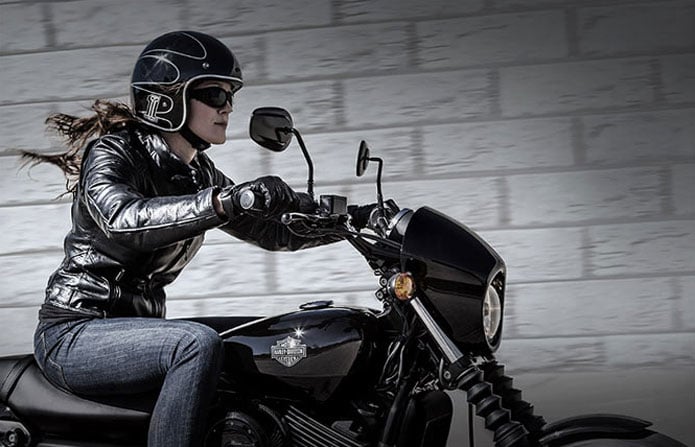 Bad Ass or not.
Harley Davidson are about to launch two new motorcycles models in US, targeted firmly at the female rider.

They represent a version of ‘the new black’ and look nothing like the chrome-heavy cruisers it’s known for. They have been called the Street 500 and Street 750 and are designed to delver a more accessible ride option for women. Harley wants a relationship with women—a lot of whom are already riding Harleys anyway, just not at the controls. They are keen to get them from the back of the bike to the front.

But for Harley Davidson it is not simply a strategy of build it and they will come. Harley has been working to cultivate women bikers for some time. Almost eight years ago, it started hosting “Garage Parties,” a nod to 1970s-era Tupperware parties in which women gather to learn some motorcycle skills, such as how to start the machine and how to right one if it falls over. More recently, Harley dealers have been offering riding instructions to rookies. The company now has about 10,000 women a year going through those programs.

However, given the brand’s male dominated heritage, is seeking to segment its product offering and pursue a female market a legitimate strategy. Some commentators suggest that it is an acceptable strategy because independence and freedom are the values that resonate with current and potential Harley riders, not testosterone.

However, there is a strong case to suggest that it is a misguided strategy. The one thing Harley has in spades is a clearly defined position in the market. The chrome, the customising and the seemingly take no prisoners outlaw gang attitude has served it well for generations within a male market. The female market reflects a brand stretch that has some risk. It has the potential to dilute the brand, to compromise its new product development and brand voice.

However, Harley CFO John Olin has a rather straight forward response to any concerns, when he was recently quoted as saying “A lot of women, I guess, like to be bad asses as well.”  That may well the case, and for the brand, one can only hope that they continue to celebrate a ‘BAD ASS’ attitude – if that is the reality then the brand has less to risk from its segmentation efforts.