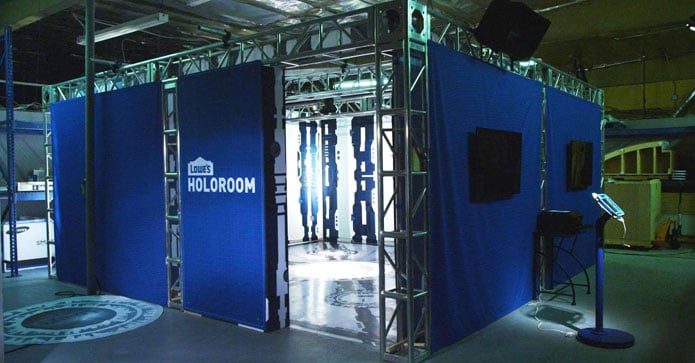 US home improvement giant Lowe’s has now teamed up with some unlikely bedfellows to create an augmented shopping experience. Inspired by science fiction, Lowe’s are hoping their ‘Holoroom’ will revolutionise the way we plan and shop for home improvement.

About a year ago, Lowe’s began staffing their Innovation Labs with a team tasted to lead innovation by testing and creating technologies, as well as partnering with start-ups.

Lowe’s are looking to create the future of home improvement and are using physical lab spaces, along with a team of science-fiction writers to envision what this might look like.

“We use the power of science fiction narratives to predict future possibilities and explain complex technologies in a way everyone can understand,” said Ari Popper, founder and co-CEO of SciFutures. “Using this science fiction prototyping process we collaborated with Lowe’s to see the world could look like, and their determination to bring that vision to life led to the Holoroom.”

The Holoroom uses augmented reality in the form of a home improvement simulator to helps customers break past the barriers of project visualisation by creating customised, life size representations of room renovation.

For Lowe’s this is all about co-creating retail solutions that deliver new experiences for consumers through technology.

“We know that for many homeowners, the struggle to visualise a completed home improvement project or to share that vision with others can stop a project in its tracks,” said Kyle Nel, executive director of Lowe’s Innovation Labs. “The Holoroom is our solution, enabling consumers to visualize their project and share that vision with family and friends.”

Lowe’s Innovation Labs debuted its first concept – the Lowe’s Holoroom – on June 11, 2014 at the Exponential Finance conference in New York City. Toronto will be the first store to have a working prototype, with others to follow later in the year. Initially the simulator will help customers plan a bathroom. Capabilities will expand to additional living spaces in the future, including the kitchen and outdoor living.