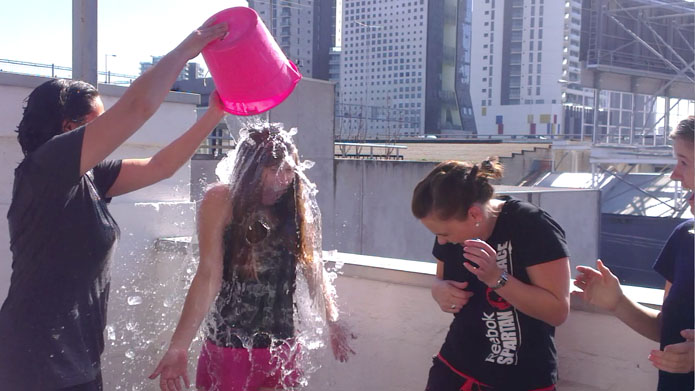 Lunchtime had been getting a little boring recently so (some of) the Truly Deeply decided to shake it up last week and got together on the balcony to dump buckets of icy cold water on each other’s heads! Luckily for us it was a balmy 21 degrees and the sun was shining. Result! The floor was almost too hot for our feet! Championed by our own Gemma D, seven of us signed up. We scoured the office frantically 10 minutes before bucket time for basins, buckets, dirty bins, anything that could make us yelp in chilling pain.

We’ve all gotten used to the impact digital and social media has had on society for the past almost 10 years and amidst the irritance of people using these platforms for vanity and general ranting purposes, every once in a compelling campaign goes viral where the results couldn’t even be imagined. You’ll have seen the invasion of Ice Bucket Challenge videos doing the rounds on social media feeds in the past number of weeks. It started with Nek Nomination (we won’t go any further into that one), then re-mastered with a positive twist by Cancer Research charities a few months back with the ‘No make up selfie’ where girls would empower themselves and post a selfie (albeit in very complimentary mood lighting) with no makeup on for breast cancer awareness. You then donate to your charity, and nominate your friends to do the same. The ‘no makeup selfie’ raised over £8 million for breast cancer in the UK in just 6 days. If you compare this fundraising drive and the cost to launch and implement it, (nothing) with the amount of time, budget and planning that goes into organising charity fundraising events, you can’t help but think that this is the future for charities.

The Ice Bucket challenge began in the US in June this year, inspired by former Boston College baseball player Pete Frates, who is currently living with ALS (a form of motor neuron disease). Once he dunked himself in ice, the campaign exploded across the globe with a galaxy of high profile celebrities and public figures from Oprah Winfrey, Bill Gates, George Bush and the Truly Deeply team looking to become involved to raise funds for the ALS Foundation. In one month, because of the Ice Bucket Challenge, the ALS Foundation recorded over $100 million dollars in donations. Last year, they raised $2 million for the same period. Aside from funds raised for ALS Foundation, many bucketeers decided to donate to different charities that they were close to, as a result, the Ice Bucket Challenge is easily the most successful viral charity drive of all time.

Being all about brand, we were interested in how brands around the world answered to the challenge. Many took the opportunity to stay in character and poke fun at themselves. Coca-Cola nominated Ronald McDonald who then in turn nominated any other red heads to take the challenge, however neglected to mention anything about raising funds.

Some brands then decided to cleverly capitalise on the global hype around the challenge. KFC dollar signs went chi- ching, when they realised they could weave their biggest brand asset (their bucket) “cus they know a thing or two about buckets” into the campaign, encouraging staff and customers to use a KFC bucket to dunk themselves, and KFC will donate a $100 to that individual. I’d be interested to see how many extra buckets were ordered in the last month.
https://www.youtube.com/watch?v=8ghhFJqThUU

But hats off to Samsung, who abandoned any moral obligation to promote donating to the charity but heroed their new waterproof Samsung Galaxy S5 in their video, challenging their inferior counterparts, the iPhone, Nokia and HTC. And the result? 4 million youtube hits and highlighting that their counterparts are behind in the race. Yes it was untasteful, but I’m off to get my new waterproof phone!

You can’t help but wonder how many other charities will adopt a copy cat approach having seen the global impact that a funny video can have on awareness and fundraising, with little or no investment cost. I’d also wonder how much appetite there is from the public for another wave. New crazes tend to have a very short shelf life, we have become a fickle bunch. Whatever way you feel about these videos, you can’t deny how much impact a funny idea, peer pressure, the enjoyment of watching your friends and out of their comfort zone (dry) and bandwagon jumping can have on society.