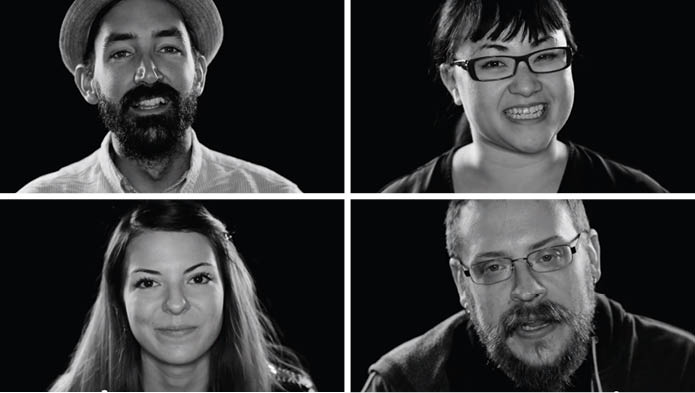 Two Minutes with TGD is a series of brief interviews that expands on the themes of creativity, risk, and what connects us.
The Great Discontent (TGD) is a magazine featuring interviews on beginnings, creativity, and risk. Starting in 2011 as an online publication, it has now grown to include print, a short film series and other collaborations.

Two Minutes with TGD – a short film series, focused on setting up a small filming station to record two-minute interviews with the Brooklyn Beta conference attendees at The Invisible Dog Art Center. Each person was asked the same three questions: Are you creatively satisfied?, What would you say to your 18-year-old self?, and What would you say to your future self? These short films provide a rather relatable and raw insight into what it is like to be a creator.

There are a number of similar responses, more often than not people struggle with the question of ‘being creatively satisfied’ where you see a number of mixed emotions, yet almost everyone results in a similar end opinion. What one would ‘say to their future self’ is also rather humorous as you see most struggle with the question and it leaves you pondering the question yourself. These films are beautiful, humorous, and raw, and they leave you thinking about your own personal journey.

Storytelling is such a powerful brand asset and this short film series and the content throughout the blog really stays true to its brand story. It is relatable, insightful and always leaves you thinking. Powerful themes such as creativity, risk, and what connects people are something we should be considering everyday. Using these films is a simple and effective marketing tactic that speaks directly to their creative audience, but also has the benefits of being relatable enough to speak to a much wider audience.

There are some wonderful interviews on the website following  peoples unique journeys that are well worth a look.