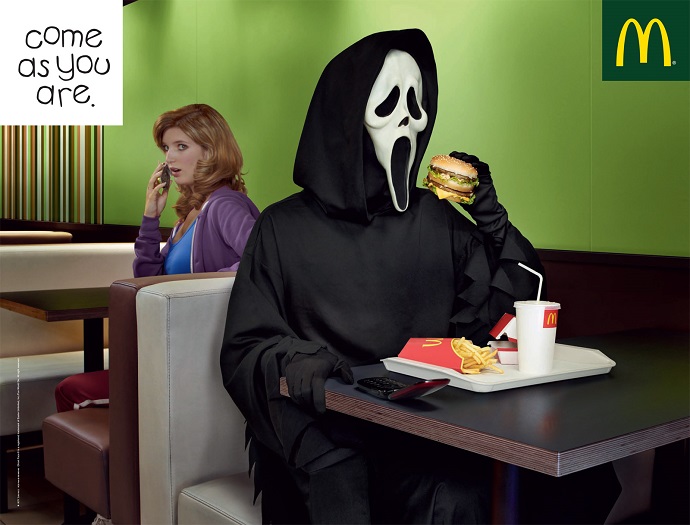 With the weekend that’s in it, and someone who isn’t overly interested in horse racing, but happy for my day off tomorrow, I was more interested in dressing as a zombie Beyonce at the weekend than donning a black and white number for Derby Day. I find it strange that Halloween is a big event in the social calendar in Europe and the US but Australians just aren’t that into it. And I can’t figure out why! A nation who is known for their sense of fun and loves to get involved but not Halloween.

Seeing as I didn’t find many Halloween ads on TV this week I had a look around to see what brands were doing this spooky season. Those doing it best managed to cleverly reenact cult Halloween classics, poke a bit of fun at themselves and position their product as the undisputed hero.

A brand who never fails to disappoint with their advertising, IKEA Singapore plays homage to a cult classic, The Shining, where the lanes throughout the giant stores are the perfect set to reenact the creepy  Overlook Hotel. With eery lighting and spooky music, we are scared for the toddler peddling through the store in his trike. We also can’t help but notice how fabulous all the kitchens and bedrooms look as he weaves through the lanes to a surreal soundtrack. IKEA capitalised on this gimmic opportunity by highlighting their daily late night shopping for customers until 11pm. Just hope they set better mood lighting than this video. To maximise on the campaign, IKEA supported the web film with a parallel online video hunt where viewers had the chance to spot and win products that feature in the film.

Audi’s 2013 Halloween ad made me laugh where they steered away from convention and decided to dress up cars for Halloween. Except instead of turning cars into transformers, or batmobiles, or even Pimping their Ride, they went around carparks in Bulgaria and placed “I’m Audi” posters on every non Audi car. Clever and cheeky guerrilla advertising at best! Well we all can’t afford an Audi, so this could be the next best thing!

But I think my favourite this year is Luxe ‘Save your Skin’. Setting the scene to your standard horror scene: Beautiful lady in the bath, slasher with a chainsaw on a scary winter’s night, who knew how handy a bar of soap would come in against a murderous villain?