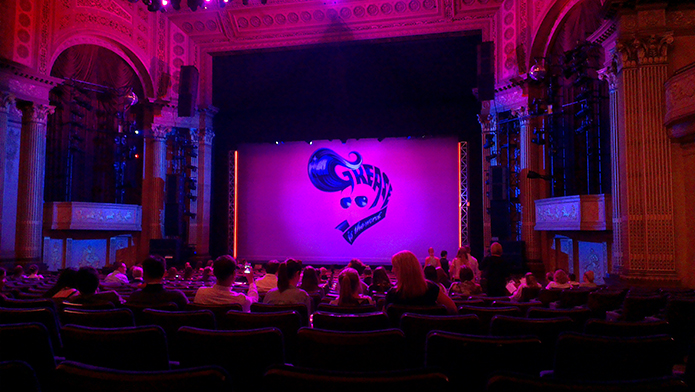 I recently went to see Grease at the Regent Theatre in Melbourne. As we were being seated the were ushers telling off people who were taking photos of the opening screen. As you can see by the person in front of me, we were both disregarding the rules. I thought this rule was absurd, they are missing out on free promotion! People instinctively want to take a picture tag their friends and share their experience on social media. If the production was smart about their social media strategy they would put a hashtag on the opening screen and encourage people to share their experience with their social networks.

I can understand that there shouldn’t be photos during the performance as this would be disruptive to the person behind you. However, there is no reason that people can’t snap a few selfies at the start of the production. With the explosion of camera phones you can’t stop people from taking photos, they intuitively want to share their experience with friends over social media. So why not give them a platform to do so and let social media do what it does best and spread the word?

The only reason I can think of is because the producers don’t want people sharing images of the production incase people don’t go see the show for themselves. However, these days people can gain access to licensed content from a number of different online sources. You only have to type in “Grease” to YouTube to watch some of the production.

Theatre is selling an experience, I think even if people see a few pics of the performance they will still pay for the experience because there is nothing quite like experiencing a theatre production live.

Other industries have had to adapt by offering content in a way which their customers want to consume it. The music industry has adapted with the likes of online streaming sites like Spotify and the TV and movie industry has done a similar thing with Netflix, while I’m not suggesting that the theatre industry starts live streaming performances I can see the benefit in allowing theatre goers to take a few pics.