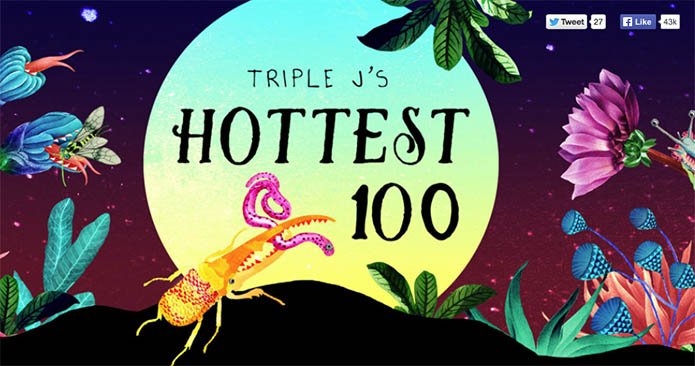 I’m not an avid Triple J listener but I must admit there is one day of the year that I tune in and listen to the station – Australia Day. The Triple J Hottest 100 has become synonymous with Australia Day and almost as traditional as a cold beer and a snag on the BBQ. I wouldn’t say that I’m the core target market of the station but I do enjoy a lot of the music they play. Over the past few weeks there has been some debate as to which musicians can be a part of the hottest 100 list, this has been sparked by a Buzzfeed article campaigning for Taylor Swift to win the hottest 100 competition with #tay4Hottest100.

The campaign to get Swift’s Shake It Off onto the list has sparked debate online with some saying that Swift has no place on the list because the station has never player her song and others staying that it’s about time the station expanded it’s list. If she does win it won’t be the first time a song that hasn’t been played on the station has made it on to the list some other artists include Green Day, Lily Allen and U2.

A lot of the argument is that Triple J should be playing more pop music even though their brand is designed for the alternate non-mainsteam audience. It would by like asking KFC to provide more vegetarian options! Triple J have a strong brand and proudly stand by emerging artists and Australian artist who don’t get picked up by the mainstream audience. In a market that is saturated by pop music you can understand why the brand and the listeners want to fight so hard to protect it from being infiltrated by music that isn’t on brand.

The reason I think this has gained some much traction is because some mainstream music listeners want to ‘stick it’ to the listeners of Triple J and make a statement rather than because people believe it should be on the list. This is unfortunate as I think people are supporting it for the wrong reasons.

If the count down is supposed to represent only music played on the station then there is no room for mainstream music on the list. That being said, Triple J needs to do more to protect their brand. If Triple J want the hottest 100 to be based on the music they play they need to develop stronger guidelines and only allow people to vote for music that is played on the station. If Taylor Swift does win the hottest 100 then it will be because Triple J didn’t protect it’s brand, it will be a tough lesson to learn but it will go to show the power that consumers can have over a brand.

On the other hand it could be argued that the list has become more than a count down listed voted for by Triple J listeners, it’s grown to be an Australian cultural icon listened to by a larger audience. It celebrates our culture, and a large part of that is the music we listen to and love, if that happens to be an American pop princess than so be it. Maybe the hottest 100 should represent what Australian’s listen to even if that music isn’t played on Triple J?

There is talk of her not being eligible for the list, it would be unfair to scratch her now especially as the guidelines are not clear. I’m sure next year there will be some serious thought put into voting rules.

I’m not really fussed if she wins or not, I’ll be happy to sit back and enjoy the countdown as it’s an integral part of how I enjoy Australia Day.