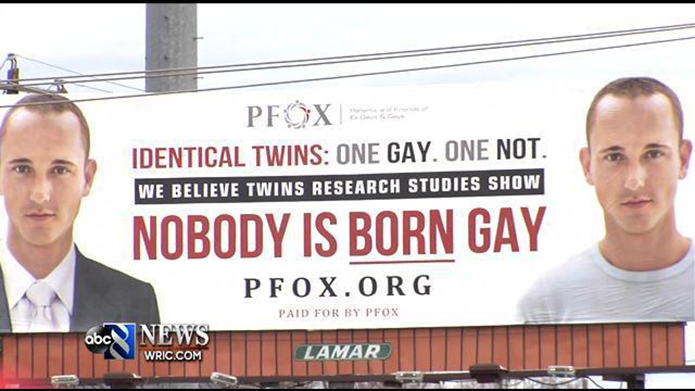 As brand designers, the discussion is all too familiar. There’s no budget for a photo shoot. “Can’t you just use a stock image and work your photoshop magic?” asks the client.

However, for PFOX saving a few bucks on images turned out to be very costly. It not only killed their campaign but it has undermined their entire brand credibility.

Parents and Friends of Ex-Gays and Gays (or PFOX) is Christian linked organisation that essentially promotes the idea that no-one is born gay and people can change their sexual orientation through family support, therapy and prayer.

PFOX installed a billboard in Richmond, Virginia, USA to promote their cause. With images of two supposedly identical guys, the message was pretty simple; “Identical Twins. One gay. One not. We believe twin research studies show nobody is born gay.”

Putting aside the controversial message aside and lack of scientific research to support this, the bigger problem for PFOX was the use of generic stock imagery. Kyle Roux, the model used in the image is not a twin and ironically for PFOX he is actually gay – and proud to be.

Roux told Huffington Post, “I’m a proud and openly gay man. I’m no scientist, but from my own life experiences, and those of my peers, I do know that being gay is not optional.”

As a result, Roux agreed to ‘out’ PFOX and run a campaign to stand against PFOX and their claims. Planting Peace, a non-profit organisation has put up a billboard close to where the PFOX billboard once stood. Designed in the same style, it deliberately calls out PFOX.

Technically PFOX did nothing legally wrong. They purchased a royalty free image so they could pretty much use it as they pleased. However, if the message they were trying to promote had any credibility to start with, it certainly doesn’t now.

This is another wake up call for any brand who isn’t being real. Authenticity is essential in any communication or risk being caught out.

Perhaps a photo shoot with some real twins may have not been so costly after all – if indeed a real case study does exist.