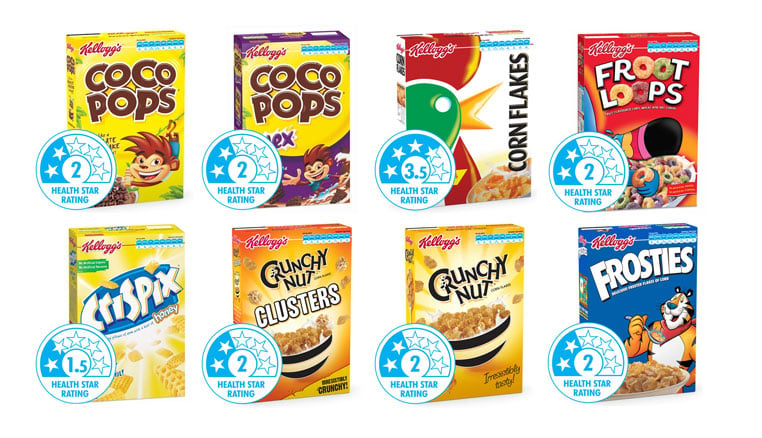 Cereal behemoth Kellogg’s this week announced they will be implementing the Health Department’s voluntary Health Star Rating system. After pressure from consumers in the form of the Choice ‘Just Not Right’ petition which collected 4,200 signatures.

While it’s understandable for an organisation the size of Kellogg’s to take time to roll such a system and they should be probably be commended for getting it done before it becomes mediatory in a couple of years time. It really highlights the dilemma for brands with the Star Rating. The Kellogg’s brand is built on the cornerstone of healthy breakfasts, yet their range of children’s cereals are of questionable health benefit. Even as part of a healthy diet. That they call them treat cereals (so there not breakfast cereals?) is a clear indication they know what the issues are.

Kellogg’s senior nutrition and regulatory affairs manager Dr Michelle Celander is quoted in the Age “At the end of the day we have many consumers who absolutely love our treat cereals and we feel that being transparent around the health star ratings is the absolute right thing to do,” she said. “They will continue to love the great taste of our cereals with the health stars or not.”

I know kids will always love the taste of sugar, but will Mums change the family’s breakfast habits? Having it pointed out to them in a slightly more obvious way may help. But it’ll be interesting to see if Kellogg’s make the move Heinz tried after the war when it was realised how bad all the salt in the baked beans were to the British public. After creating a reduced salt version of the product that failed miserably with the salt addicted brits. The company decided to incrementally reduce the salt amount, to wean the public palate towards a healthier product. I’m not sure how successful they were or wanted to be but it demonstrates at least some different thinking that resonates better with the brand.

It’ll be interesting to see what effect the rating system will have on Kellogg’s treat cereals, wether they hold their ground, maybe reformulate over time or introduce new variations to creep up those star rating.

After a successful night and many sore heads, we are pleased to announce most of the artworks have now sold and we will be contacting the successful bidders! There...

Walking the streets of Paris recently I was struck by the appearance of the latest point of sale campaign for Coke. It wasn’t the visual language of the campaign...

In an innovative approach to consuming with minimal waste, Harvard Professor David Edwards and his team have developed WikiCells, self-contained, edible packaging for liquids, mousses and emulsions. The membrane...