Entertainment channel ITV2 has rebranded as it looks to appeal to a younger audience and implement a digitally led promotional model.

ITV2 is a 24-hour, free-to-air entertainment television channel and more commonly known as the naughty sibling of the ITV family in the UK. ManvsMachine have created a ‘badly behaved’ channel brand system that disregards the norms of scheduling. This is aligned with the introduction of the channels new tag line to support the redesign – ‘TV. And Then Some’.

Taking a similar approach to MTV’s recent rebrand, ManvsMachine has created a series of idents for ITV2, which offer an unusual take on everyday objects. Idents are randomly generated using an algorithm, and were created as part of a brand refresh which sees the channel shift its focus to creating content for 16-34-year-olds. The brand is now a fun and dynamic explosion of cute sausage dogs, wobbling jellies and smashed clocks, flashing across your screen in random fast bursts. The choice of objects is based on the idea of presenting “life amplified”, so with thousands of different idents created by the algorithm, no two will look exactly the same. 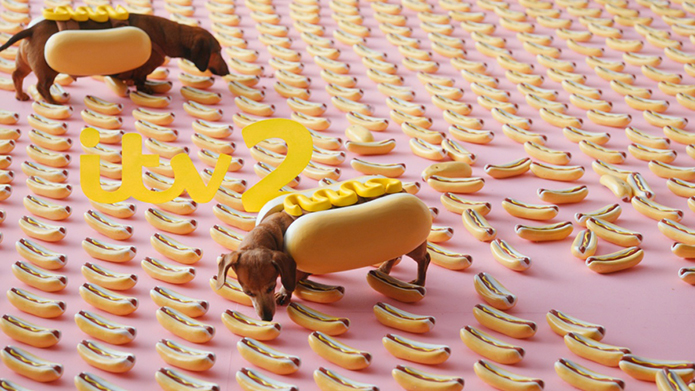 Most networks have a pre-packaged set of idents of which the channel is identified with. To shake things up an automated modular play-out system that assembles idents on the fly was created by ITVs Creative team and ManvsMachine. Like a digital tombola, the system randomly sequences snippets from bespoke ITV2 branded ’scenes’. This results in over 300,000 ident iterations, or to put it another way, you would have to stay tuned-in for 36 years to enjoy every possible combination.

The sequences have been created using a mix of CGI and live action, ITV’s rebrand also featured some randomly generated elements, such as a colour-picker tool which would adapt the channel’s logo to match the colours in footage being shown on screen.

Executive creative director Tony Pipes says the aim was to “inject some pace, energy and entertainment into the channel as it shifts its focus to a younger audience. We wanted a new look and a new promotional model, that was more flexible, with more licence, that was fun and dynamic, always updating, weaving in with our social feeds, and better reflecting the kind of channel ITV2 is. We talk about how what unites our content is that it’s ‘outrageously entertaining’ – with the likes of Keith Lemon’s shows, home-grown comedies such as Plebs and The Job Lot, entertainment like Release The Hounds, and Tricked … so wanted to re-boot our branding architecture to better reflect that personality.”

Alongside the idents, ITV2 will be updating its social media feeds, including its Instagram and Facebook profiles, to present more youth-focused imagery and animations.

Best practice for brands is problematic

Business literature keeps advocating the need for businesses to pursue best practice. To aspire to achieve against a set of metrics that are considered optimum performance in a given...

Apple demonstrates the power of an iconic brand identity

Don’t try this with your branding at home Apple recently announced their upcoming event where the company is expected to announce their latest product developments. Stepping outside their standard...

With the Sochi Winter Olympic Games fast approaching, we’re starting to see lead up advertising. As a life long skier and winter follower, the Olympics are the highlight of...

No differentiation. Wesfarmers continues to cannibalise their brands.

Target gives up on brand differentiation and becomes another Kmart The remarkable turnaround of Kmart in the past few years has left its competitors scrambling to compete. The strategy...

Wine critic Huon Hooke in The Age 3/5 suggests that Penfolds Grange may be regarded as Australia’s greatest wine by some, and that the 2008 vintage is one of...