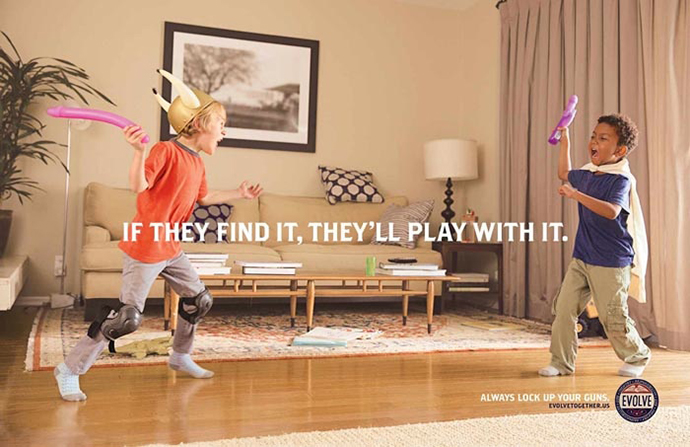 At first it seems a bad joke but no, this is actually a legitimate campaign to ‘educate’ parents about gun safety. Evolve uses humour to get through to what they call ‘dumbasses’ who leave their guns within reach of kids.

Evolve USA claims to be an impartial voice on the gun debate. However, this campaign feels more of a disingenuous distraction than anything else. 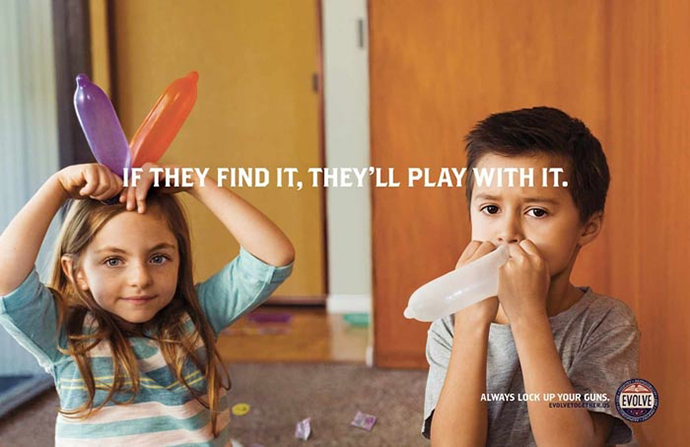 According to Evolve’s stats, more than 16,000 people are injured or killed in preventable gun incidents every year in the USA. They don’t mention how many people are killed or injured due to violence involving guns.

Evolve say they have support from gun owners and people who have never touched a gun. Apparently, everyone drops their political agenda when they enter the Evolve space.

However, on their website Evolve almost mocks the gun debate “Yes, there’s a raging gun debate out there. But no matter how loud anyone is yelling whatever they’re yelling, everyone can agree, we can be safer. Right, responsible gun owner? Right, left-leaning senator? Right, Mom?”

“We’re thinking America can stop shooting itself in the foot. We’re thinking everyone can pause the debate for a sec and pay attention to one simple thing: somewhere out there is an unlocked, loaded gun.”

But then again, I am horrified that there is even a need for this campaign in the first place.