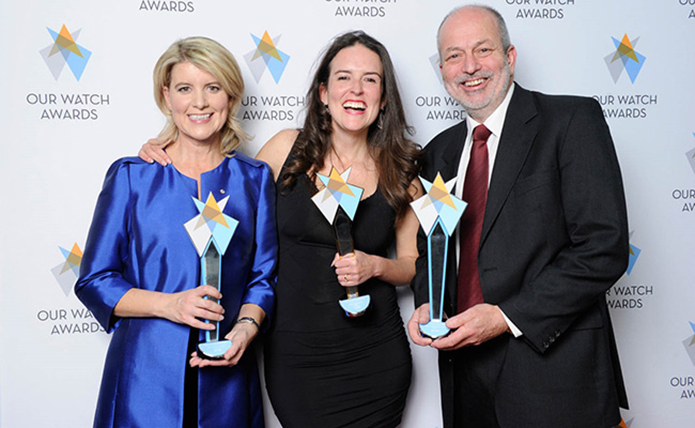 We’re proud supporters of this brand, not just because we helped create the brand but because we fully support the cause and couldn’t agree more that we need to talk more about this issue. The awards took place on a day marked by yet more tragedy – the murder of two more women in Queensland, and the attempted murder of another. A stark reminder that this is an issue that we all need to talk about so that collectively we can do what we can to ‘stop it before it starts’.

Survivor/Advocate Ann O’Neill from Western Australia spoke of her own experience with the media. Twenty-one years ago Ann’s estranged husband killed their two children Kyle and Latisha and made an attempt on her life, before killing himself. Dr O’Neill woke up in hospital to media reports saying ‘what a nice guy’ he was. She was often asked what she had done to ‘make him do it’. The answer that she eventually settled on was simple. “I breathed. I think that’s the part he didn’t like.”

Jess Hill has been named the inaugural winner of the 2015 Our Watch Gold Award for her reporting on violence against women.

The Our Watch judges said: “Jess Hill devoted a year of her life to researching and reporting exclusively on domestic violence.

“Her entry comprises two longform articles, (one for The Monthly and one for The Guardian); and two radio documentaries for the ABC’s investigative Background Briefing program.

“Through quality journalism, she has raised awareness of the complexities of domestic violence and its prevention. Her dedication, deep research and directness of style have produced a series of reports which are both comprehensive and accessible.

“Jess Hill’s body of work is an outstanding document of record deserving of the Our Watch Gold Award for exemplary reporting to end violence against women.”

Our Watch Chair, Natasha Stott Despoja, said “the inaugural Our Watch Awards celebrate a new era in the reporting of violence against women.”

She said the 177 entries received by Our Watch and the Walkley Foundation indicate the national conversation around violence against women and their children is progressing.

This includes more responsible journalism when it comes to reporting on domestic and family violence and sexual assault.

“We are seeing a significant change in the public’s understanding of the drivers of violence against women and there is a growing collective commitment to prevent such violence.