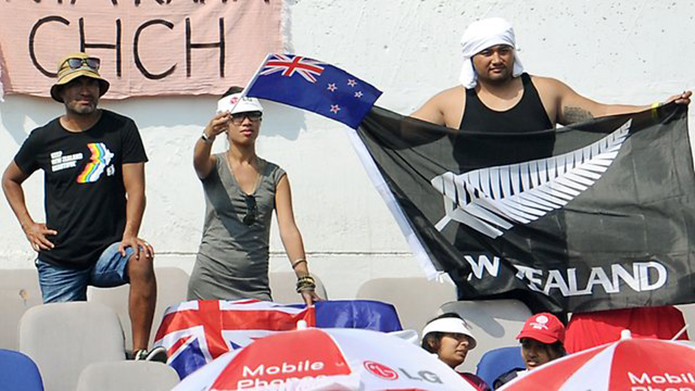 New Zealand is currently in the process of deciding whether to adopt a new flag. I’ve been watching the debate with interest and I’m surprised that there is resistance amongst the Kiwis and a large number of people are not ready for a change. What an incredible opportunity, it’s not every day that a country can re-define it’s brand and unite under a flag that truly represents who they are and represents them on the world stage for the future.

A flag is an incredibly important representation of a country, being the brand geeks that we are we would argue that a flag is a country’s Brandmark. But unlike other brands which have the luxury of communicating to a specific target market a flag needs to unite a whole nation. No easy feat.

Does a flag past the brandmark test?

We think a flag passes the test. Kiwis finally have an opportunity to have a flag that doesn’t get confused as Australian and a design that really embodies the countries essence. I’ve met enough Kiwis to know that they are fiercely patriotic, independent and proud of their country, and rightly so. They need an identity that is uniquely their own and says to the world “We are proud Kiwis and there is so much more to NZ than the All Blacks and no we are not the same country as Australia, come and see for yourself!”

The government is being fair with it’s approach and providing a referendum for Kiwis to vote. But first the Government Panel selected the top four flag designs. And here they are….. 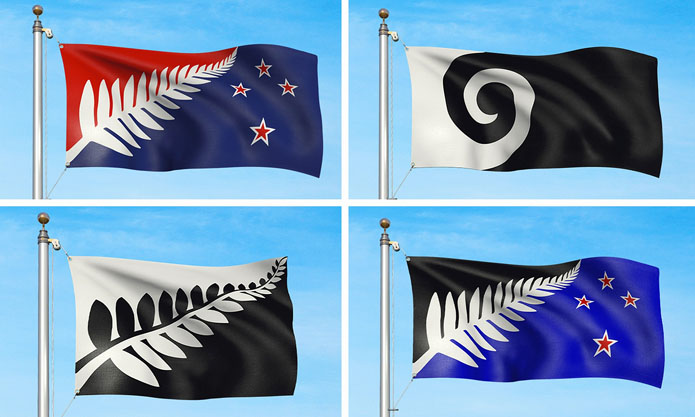 You could argue that there is only really two designs and the others are variations. If we presented four concepts like this to our clients we’d see some disappointed faces, where is the choice?

The silver fern seems like an obvious choice as it is instantly recognisable as a New Zealand symbol. However, it has a lot of sporting connotations,  the All Blacks and the silver fern have become synonymous. While the fern isn’t solely a sporting symbol, NZ Soldiers had silver fern badges stitched to their uniforms, it does overwhelmingly have that connotation and I can see why it’s off-putting to those kiwi citizens who want something that represents more than just the sporting community.

If you look at other flags around the world the best designs don’t have such graphic symbols on their flags (with the exception of Canada). You don’t see Australia campaigning for a kangaroo on the flag, or France for a rooster or Ireland for a harp. They still use those symbols in other applications and New Zealand can still proudly use the silver fern but perhaps it’s best place is not on the flag.

What has resulted is a scenario which we call ‘mash the two together”. Our clients sometimes have trouble deciding between two concepts and ask us to combine the best parts of both into one design. That is what is happening with the combination of the silver fern and the southern cross. It is trying to appease people on both sides of the fence by including the best parts of both and in doing so has become complicated with no definitive direction. 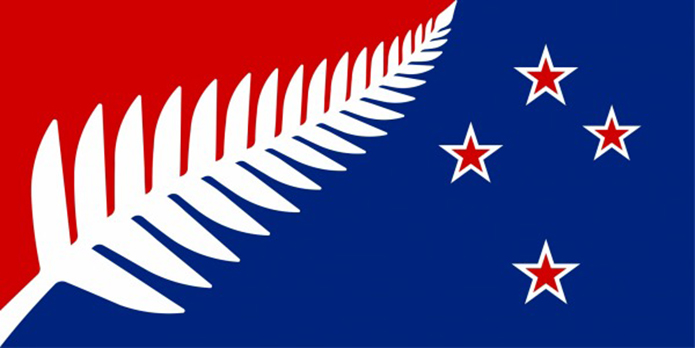 After some uproar and a social media protest there was a late comer to the mix, enter Red Peak. Thank goodness, at last a flag with design consideration and thought behind the symbolism. In my opinion it’s time for a revolution not an evolution and most of the first four don’t tick the design considerations boxes or the brandmark checklist.

It does have a sexy mock up which helps its cause, but more than that, it is broad enough to be able to unite Kiwis from all reference groups. The white triangle symbolises the natural beauty of the country while throwing a subtle reference to “the land of the long white cloud”, the red triangle can symbolise the Maori meeting house (Marae) and the black and blue triangles illustrate that NZ is one if the first countries to see the sunrise each day because of it’s geographic position.

The main resistance seems to be from the cost of the exercise. The NZ Government is spending $25M + for the referendums to decide on a change of flag. Yes it is a lot of money but in comparison to other Government expenses its a drop in the ocean. To give it some context it is estimated that BP spent $211M on their new brand a few years back (not that we think that’s reasonable) but it does give some perspective. Tourism is one of New Zealand’s biggest industries, a new flag will give the country a distinct and unique positioning in the world and may attract even more people to check out what makes the country so beautiful and unique.

The flag is simple, strong, distinctive and can unite all Kiwis for the future. In my opinion, I think it’s time for a new brand not a brand update, it’s not every day that a country can align it’s flag with the essence of the country, seize this opportunity and invite the world in.