Popularity Doesn’t Equal Brilliant Brand Naming
There’s a fascinating and more than amusing story playing out right now in the world of brand naming. The Natural Environment Research Council NERC) in the UK is launching a new multi-million dollar research vessel and has asked the public to suggest and vote on the ship’s name. This trend of using the net to gauge public opinion as a way of coming up with the best brand name has proven a road to disaster for too many, but a lesson in best practice for too few.

Only a few years back Kraft Foods in Australia looked to public opinion to name their new product extension for the famous Australian Vegimite brand. The name that got the nod was; ‘iSnack 2.0‘ – a lame mimic of Apple’s ‘iProduct’ naming protocol. iSnack 2.0 would have been a hilarious brand gesture if not such a completely crap brand name. Once announced the decision was met with howls of derision and laughter – it seemed everyone but the brand manager was aligned to the folly of this decision. Kraft quickly reversed the decision, called-in the experts and re-named the product Cheesybite.

Now our friends at NERC find themselves in a similar position. After suggesting “The ship could be named after a local historical figure, movement, or landmark – or a famous polar explorer or scientist”, the British public have demonstrated their sense of humour and put forward the rather non-majestic suggestion of ‘Boaty McBoatface’. And what do you know, Boaty McBoatface has trended like greased lightening causing outages on the site as the poms flooded online to get in on the joke. 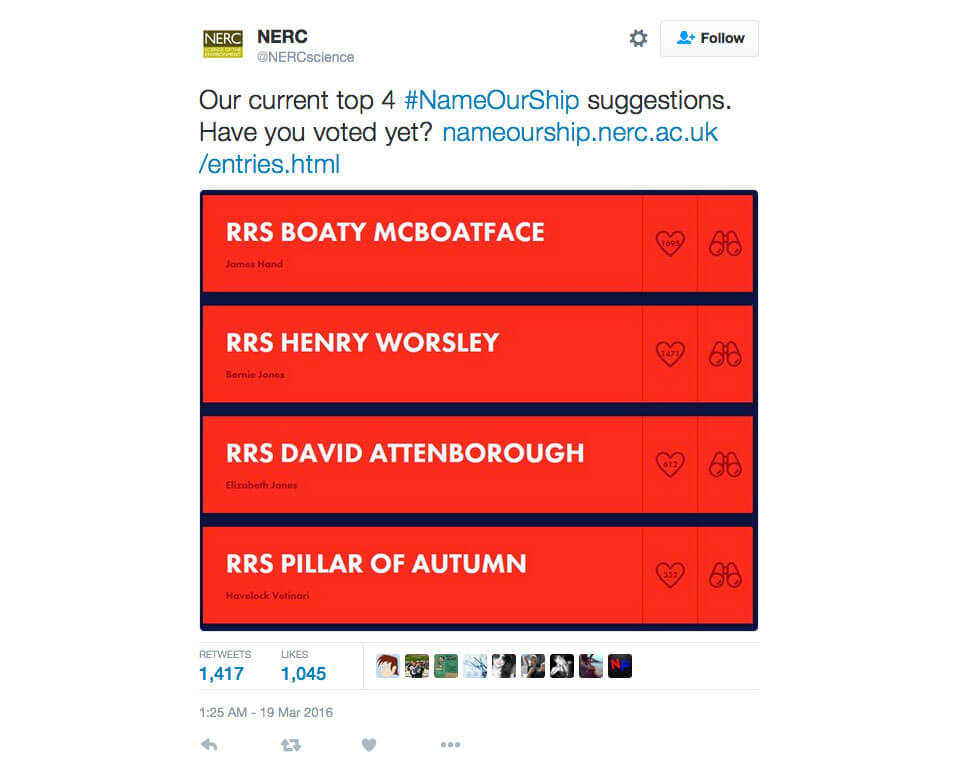 Finally can we put to bed the false assumption that popularity leads to a popular brand outcome. The world’s most successful brands drive their naming strategically, using consumer insights to direct the process, and sometimes even testing brand name options, but never handing it to the masses for creativity.

As Henry Ford supposedly said; “If I had asked people what they wanted, they would have said faster horses that eat less.” Some things should be left to the experts.