The History of BMW’s brand mark.

As brands evolve and mature the rationale behind the design of their logo often becomes folklore, coloured as much by popular myth than historical fact. Recently global automaker BMW published an article clearing-up the story behind their iconic brandmark.

“Many people believe the BMW logo is a stylized propeller. But the truth is a little different.”
Fred Jakobs, Archive Director, BMW Group Classic.

The name BMW was taken from the Bayerische Motoren Werke (or Bavarian Motor Works) which dates back to 1917. BMW was developed as the new name for aircraft engine manufacturer Rapp Motorenwerke,who planned to expand their product line beyond aircraft engines to engines for cars, agricultural machinery and boats. Initially a B2B manufacturer, “the logo and the meaning of the symbol weren’t really in the limelight in the early days,” explains Fred Jakobs. “In those first few years, BMW just wasn’t present in the public consciousness.” Business consisted mainly of the licensed production and maintenance of aircraft engines for the newly-formed German Air Force (Luftwaffe).

located in Munich, the capital of the State of Bavaria, Germany, the BMW Logo features the colours and pattern from the Bavarian flag. The placement of the colours were in reverse order to the flag (at least as far as heraldic rules are concerned) as the trademark laws of the time forbade the use of Bavaria’s coats of arms or other symbols of sovereignty on commercial logos.

On October 5th, 1917 BMW released their first brand mark. The first BMW badge retained the round shape of the old Rapp logo. The outer ring of the badge was edged with gold lines and bore the letters BMW also in gold.

So where does the propeller myth about the BMW logo come from?

Over time the broadly accepted meaning was that the BMW brand mark depicts a rotating aircraft propeller. BMW have revealed that the myth of the BMW propeller came about thanks to a BMW ad from 1929 which showed an airplane with the BMW logo in the rotating propeller. ‘At the beginning of the global economic crisis, the ad was trying to promote a new aircraft engine that BMW was building under license from Pratt & Whitney. The propeller interpretation fit very well into the advertising image of the young company, as it underlined the company’s roots and its expertise in aircraft construction.’ 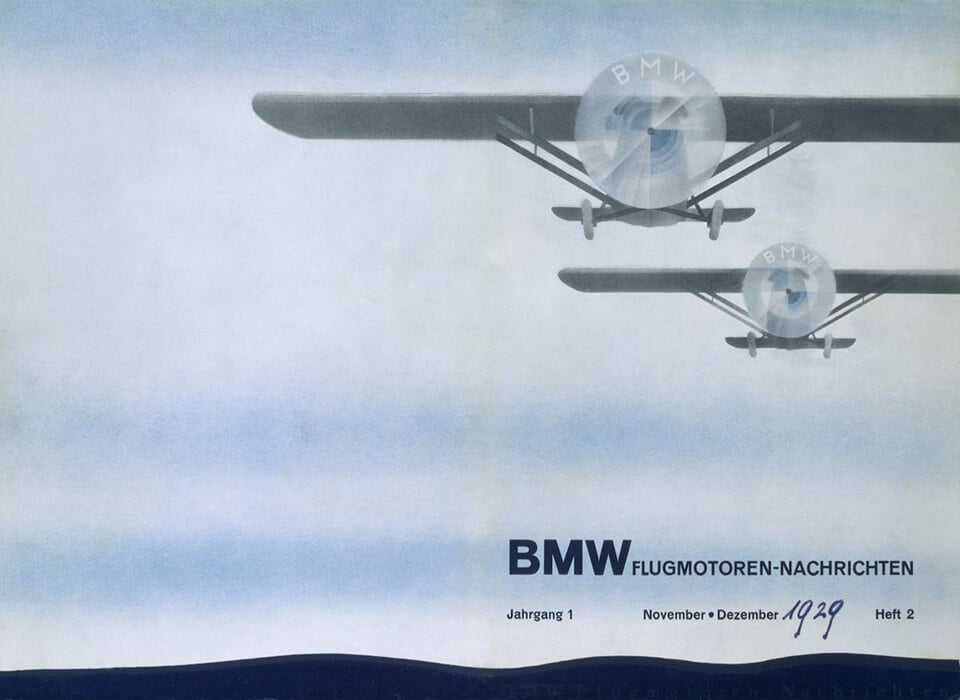 Then, in 1942, BMW itself linked the propeller to its company symbol. An article appeared in a BMW publication called “Flugmotoren-Nachrichten” (Aircraft Engine News) which backed up the story of the BMW badge as a spinning propeller. The story was illustrated with a photo of the BMW logo overlaid on a rotating propeller.

“For a long time, BMW made little effort to correct the myth that the BMW badge is a propeller. “This interpretation has been commonplace for 90 years, so in the meantime it has acquired a certain justification,” Jakobs explained.

Dave Ansett
David is the founder of Truly Deeply, a Melbourne branding agency with 25 years experience working with brands to position them for growth. His deep expertise is in the creation of high engagement brands that attract the attention of their audience and stand out from their competitors. David has extensive experience working with corporate, retail, food & beverage and entrepreneurial clients. Find out more here
For monthly updates of our thinking, click here to receive our free Brand Newsletter

You can read the complete article from BMW here.
Pics courtesy MBW.